Pathologists cannot establish cause of death, making case much harder to solve 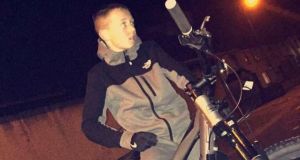 Keane Mulready-Woods: Gardaí suspect the teenager’s body parts were to be dumped outside the homes of leaders of the Drogheda crime gang the teenager was aligned with as a warning

Gardaí have been unable to determine the cause of death of teenager Keane Mulready-Woods (17) as some of his remains are still missing.

Detectives working on the case believe it will be extremely difficult to charge suspects with murder if pathologists are unable to confirm he was murdered or ascertain the manner of his killing.

Burial took place in Drogheda, Co Louth, this week, one month after the boy’s death, but his torso has still not been found.

Gardaí believe the teenager was killed, probably after being tortured, in Drogheda on Sunday, January 11th, shortly after he was last seen alive in the town at about 6pm.

Detectives are working on the theory he was killed, probably by stabbing, and dismembered in a house in Drogheda before his remains were separated.

His limbs were found in a bag on a pavement in the Moatview estate in Coolock, north Dublin, at about 10pm the day after he was killed.

In the early hours of Wednesday, January 14th, the teenager’s head, feet and hands were found in a stolen car that was set on fire in a laneway off Clonliffe Avenue in Dublin’s north inner city.

Despite intensive searching in Drogheda, including along the banks of the river Boyne close to a house where gardaí believe the victim was dismembered, his torso has not been found.

The teenager’s killing was the third in the worsening feud between two drug gangs in Drogheda, which are also linked to Dublin criminals.

Sources said it had proven almost impossible in the past to charge people with murder in cases where the victim’s remains had never been found, or when partial remains were found, and the cause of death could not be confirmed.

Detectives working on the investigation have no cause of death to inform their inquiry, because the fatal injury is believed to have been to the torso.

Gardaí have not ruled out the possibility the torso was disposed of in a deliberate plan to ensure the investigation would be frustrated.

Graham Dwyer was convicted in 2015 of the murder of childcare worker Elaine O’Hara (36) in 2012 despite the cause of death never being established because some of the dead woman’s remains were never found.

However, Garda sources said that case was an exception and that prosecutions in such cases were “extremely difficult”.

Keane Mulready-Woods would have celebrated his 18th birthday the week before last. He was buried on Thursday after several hundred mourners gathered at Holy Family Church, Ballsgrove, Drogheda, for his funeral Mass.