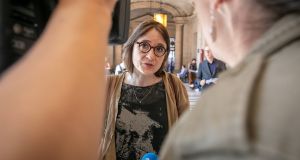 Lawyer for the family of Sophie Toscan du Plantier Marie Dose outside the courtroom where the trial of Ian Bailey was held. Photograph: Marc Piasecki

There is sufficient evidence to establish that Ian Bailey murdered French citizen Sophie Toscan du Plantier, the judge at his trial in Paris said on Friday.

Delivering the verdict of the three-judge court, Judge Frédérique Aline said “there has been no acquittal” in Ireland, where Ms Toscan du Plantier was killed.

A decision by the Director of Public Prosecutions in Ireland not to prosecute Mr Bailey “does not have the value of a definitive judgment”, Judge Aline said.

Mr Bailey (62) from the Prairie Liscaha, Schull, Co Cork was convicted in his absence by the three judges of the Cour d’Assises of Paris of the voluntary homicide of mother of one, Ms Toscan du Plantier at her holiday home in Toormore on December 23rd, 1996.

In handing down a guilty verdict, and a 25-year prison sentence, the court considered “the extreme gravity of the actions he is accused of, that is to say the murder of a 39-year-old woman by striking her on the head with a cinder block”. “The victim was vulnerable, small in stature, and was forced to flee from her home. Her many wounds attest to the violence of the blows.”

Mr Bailey’s “borderline personality” attacks on his partner and “an obsession with his own sexuality, as shown in the notebooks seized by police”, all contributed to the decision.

Although the European arrest warrant issued by France on February 16th, 2010 was still valid, the court followed the prosecutor’s request for a new warrant “to demand the execution of the present decision”.

Judge Aline began her half-hour explanation of deliberations with two other judges with a summary of the conclusions of Dr John Harbison, the state pathologist, and French doctors who re-examined the remains when the body was exhumed years later. Ms Toscan du Plantier’s many lacerations and fractures proved that she “fought hard”, Ms Aline said.

“In view of the results of the autopsy, it is uncontestable that Sophie Toscan du Plantier was killed deliberately,” the judge read. “The intention of homicide is clear from multiple wounds to the vital region of the head.” Cuts from thorns attested to the victim’s flight and struggle.

Despite Mr Bailey’s many denials and legal appeals, the judge said, “the absence of his implication does not stand up to examination.”

Judge Aline summarised “concordant testimony” from multiple witnesses who saw wounds on Mr Bailey’s hands, arms and forehead from the 23rd of December; wounds which were not present on the evening of December 22nd.

Both the prosecutor and judges regarded Mr Bailey’s wounds as important evidence. They discounted his assertions that he sustained them by killing turkeys and cutting down a Christmas tree.

Nor did the court accept Mr Bailey’s claim that he did not know the victim. Several witnesses said he had met her. He told the newspaper editor Helen Callanan and Tomi and Yvonne Ungerer, among others, that he knew her.

Mr Bailey’s partner, Jules Thomas “went back on her initial testimony that he spent the night in bed bedside her”. His version of his movements on the night of the murder “varied a great deal”, the judge said.

For ten years, the witness Marie Farrell confirmed having seen a man outside her shop in Schull on December 21st, and the same man at 3am on December 23rd, near Kilfeadda Bridge.

“She formally identified him as Ian Bailey, including in the 2004 defamation trial. Taking account of the spontaneous nature of her testimony, her retraction can only be attributed to continuous intimidation by Ian Bailey and his entourage,” the judge said.

Mr Bailey said he learned about the murder, and that the victim was French, at 2pm on December 23rd. Several witnesses said he told them hours earlier.

“These elements of proof cannot be set aside because two witnesses retracted testimony,” the judge said. The body was discovered 2.4 miles from Mr Bailey’s home.

Ms Aline said “the nature and gravity of the crime” could be linked to Mr Bailey’s personality and behaviour. Six months before the murder “he committed acts of extreme violence” against his partner.

“He pulled out her hair, nearly tore her eye from its socket, forced her to have stitches on her lip. . . in notebooks seized by police, he admits that he wanted to kill her.”

Mr Bailey attacked Jules Thomas when he consumed large amounts of alcohol, circumstances repeated on the night of the murder, the judge said.