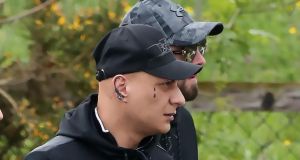 Hamid Sanambar was suspected of involvement in a number of gangland shootings over the past 18 months. Photograph: Collins Dublin

Murder victim Hamid Sanambar had repeatedly come to the attention of the Garda and been convicted of several crimes, but the decision to grant him political asylum in Ireland was never reversed.

He was arrested in Spain about 4½ years ago with the current leader of the Kinahan cartel Daniel Kinahan while Sanambar was on the run from the Garda.

The 41-year-old Iranian national was out on bail, on a robbery charge, at the time of his shooting dead on Kilbarron Avenue, Kilmore West, on Tuesday afternoon.

He was suspected of involvement in the murder last Tuesday week in north Co Dublin of Seán Little (22). While a friend of Little’s, gardaí suspect Sanambar murdered him for a fee paid by a Finglas-based drugs gang.

Gardaí suspect the gang believed Little wanted revenge for the killing of his close friend Zach Parker in Swords in January over an unpaid drugs debt, and so killed him.

Another friend of Little’s, Jordan Davis (22), was shot dead in Darndale, less than 24 hours after him. Gardaí are trying to determine the links, if any between all three killings.

Sanambar was on his way to the Little family home, ostensibly to pay his respects, when he was ambushed and shot dead by three masked men.

Gardaí now fear that Little’s associates suspected by the Finglas gang in Sanambar’s murder are at risk. Sanambar was suspected of involvement in a number of gangland shootings over the past 18 months.

The Irish Times has established the only time Sanambar was sentenced to time in prison was in June 2011, when he was given a five-day sentence in lieu of not paying a fine for driving without insurance.

He was sent to Wheatfield Prison, west Dublin. However, he was then instantly released; a process known as a “turnaround”, which was used in the past to control numbers.

It meant a short sentence was regarded as instantly served and the prisoner released from holding cells and without ever spending any time in the prison proper.

In his dealings with the Garda, Sanambar often tried to pass himself off as an older man, apparently to conceal details of his criminal background, though he always kept March 1st as his birthday.

He varied the year of his birth in a bid to pass himself off as two years older, or younger. However, gardaí believe he was born in 1978, meaning he was aged 41 when he was killed.

His first Irish conviction was recorded in November 2007 in Cork City, though he was then living at Centenary Square in Longford town. He was convicted of drink-drinking, and of having no tax or insurance.

He was fined €250 and disqualified for a year. Gardaí then believed he had been living in a hostel for asylum seekers. Less than 18 months later, he received a one-month suspended sentence for a public order incident in March 2009, when he was threatening and abusive to gardaí on Marlboro Street, Cork City. At that time Sanambar was living in Blackrock, Co Cork.

In September 2012, he committed the most serious crime for which he was ever convicted – the robbery of two women in a Cork City brothel in Cove Street. Afterwards, Sanambar evaded gardaí, fleeing to Spain.

He was keen to retain the status allowing him live and work in Ireland, and by extension in the European Union, and gardaí were told he planned to return to the Republic to face the charges.

However, detectives in Dublin soon established that he was mixing with senior members of the Kinahan cartel in Alicante; during the period before the Kinahan-Hutch feud broke out.

Sanambar was arrested in south Spain in the second half of 2014 with Daniel Kinahan; though the reason for their joint arrest, or how they met, was not clear. He returned to Ireland in early 2015.

He was 38 when the Cove Street case reached the courts in 2015, and living in Dominick Street, Cork. He pleaded guilty to robbing one woman of a laptop, phone and €1,060 and £250 sterling in cash.

He also admitted robbing a laptop, a phone and €3,000 from another woman, and €100 from a man at the premises and entering the building as a trespasser to commit theft.

The court was told Sanambar had committed the robbery with three Irishmen he had met road bowling. After the three-year suspended sentence was imposed, he again fled to Spain. Again, he was in the company of Daniel Kinahan,

Sanambar was also very close to a Dubliner in his 30s who is believed to have relocated from Spain to Dubai with the Kinahans in recent years, with deep links to gun-running and drug trafficking.

That man is a senior Kinahan cartel member and is suspected of involvement in the 2010 killing of Finglas gang leader Eamon Dunne and the 2003 fatal shooting of Raymond Salinger. Both were murdered by the Kinahan gang in pub attacks.

In November 2017, Sanambar was fined €200 for possessing a knife in Longford town. Last February, he was charged with possessing a stolen mobile phone. He was due to return to court on June 13th. That case will now be struck out.

1 ‘Summer is not lost’ - Taoiseach announces accelerated easing of coronavirus restrictions
2 Fatal police shooting in Kentucky cuts to heart of community divisions
3 Coronavirus: People to be allowed to travel anywhere in their county from Monday
4 Pubs reopening will not mean ‘fellas having a few pints and peanuts’, Holohan warns
5 Donald Trump is in trouble, and that could spell very bad news
Real news has value SUBSCRIBE