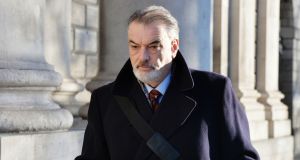 Prosecutor Jean-Pierre Bonthoux said there was “overwhelming” evidence that Ian Bailey murdered Sophie Toscan du Plantier in his summing up at the close of Mr Bailey’s trial on Friday.

Mr Bonthoux severely criticised the way the Irish Director of Public Prosecutions handled the case. He asked the court’s three judges to issue a third European arrest warrant for Bailey’s transfer to France.

Ms Toscan du Plantier’s murder in west Cork in the early hours of December 23rd, 1996 “was as dark as she was sunny, as barbaric as she was elegant,” the prosecutor said. He saluted the dead woman’s memory, asked judges to give her justice and expressed admiration for her family. “It is to a large extent thanks to them that this trial has taken place.”

The French police and justice system did not deserve “the distrust and unbearable contempt” expressed by the accused and his counsel, Mr Bonthoux said. He denounced Mr Bailey’s “cowardice” in refusing to attend the trial.

Irish authorities had raised “many obstacles, to slow things down, to prevent things happening,” Mr Bonthoux said. The Irish even refused to transmit the French court’s summons to Mr Bailey, he said.

“Mr Bailey is mocking us,” Mr Bonthoux continued. “I don’t reproach him for looking at the full moon, for being borderline; alcoholic, violent with his partner, a failed journalist and a failed gardener. It is far more serious than that.”

Mr Bonthoux addressed allegations that this was “a trial without evidence”. It was “against common sense” to consider that DNA and video evidence were the only kind acceptable.

Mr Bonthoux admitted the Irish DPP did not share his opinion. A report drawn up for the DPP’s office had taken every piece of evidence and systematically “tried to invalidate it. As the document is not signed, not dated, I initially thought it was written by Bailey’s lawyers. The language is always conditional when it’s against Bailey, affirmative when it clears him.”

The testimony of Marie Farrell that she saw Mr Bailey on the road at 3am on the night of the murder was “fundamental”, the prosecutor said. Her life had been “turned upside down” by the experience. She had maintained her testimony for 10 years, before retracting it with the help of Mr Bailey’s lawyer.

In France, Mr Bonthoux said, Mr Bailey’s lawyer would have been disbarred for intimidating a witness.

The prosecutor quoted Malachi Reid, who was 14 years old when Mr Bailey told him he had “smashed [Ms Toscan Du Plantier’s] brains in with a rock”.

The DPP discounted Mr Reid’s testimony, because the teenager only told his mother about it the following day. “Surprising methods,” Mr Bonthoux commented.

Six people who watched Mr Bailey play bodhrán in a pub, with his sleeves pushed up, saw no marks on his hands or forearms, nor a cut on his forehead, on the night of December 22nd, the prosecutor said. The following day he was covered with scratches and had a bleeding cut on his forehead. The DPP discounted this evidence.

Gardaí recorded “small lacerations of one centimetre covering [Mr Bailey’s] hands and forearms”. These were caused by running through thorn bushes, the prosecutor said. “The marks on the body of Sophie Toscan du Plantier and Ian Bailey’s hands and arms are identical. That is material evidence.”

The prosecutor noted that the DPP “never visited the scene of the crime”.

Mr Bonthoux said that when Mr Bailey and Ms Thomas stopped on a hilltop to look at the full moon around midnight, Mr Bailey said he saw a light on at Alfie Lyons’s, Ms Toscan du Plantier’s neighbour. Lyons testified he and his wife were asleep.

The light came from Ms Toscan du Plantier’s house, the prosecutor said. “This is an important element because . . . it activated Ian Bailey’s imagination. He knows these houses by heart. He did gardening there.”

Mr Bonthoux contested Mr Bailey’s claim that he went to his studio to write a newspaper article in the middle of the night. A witness described the studio as a shack. It was unheated and the temperature was two or three degrees. “Another lie. He went out, certainly not to write an article.”

Mr Bailey said he learned of the murder from Eddie Cassidy at about 2pm on December 23rd. But he told other witnesses about the killing earlier, the prosecutor said. Mr Bailey knew the victim’s nationality before it became public knowledge. He had photographs of the scene of the crime.

When Mr Bailey told the then Sunday Tribune editor Helen Callanan that he had done the murder “it wasn’t humorous,” Mr Bonthoux said. Nor was it natural for an innocent man to talk about the murder for an entire New Year’s Eve. “It was an obsession. He really wanted to confess his guilt. ‘Yes, I did it. I did it. I did it.’ The Shelleys were so surprised that they rushed away.”

Ms Toscan du Plantier “realises what is happening, tries to get away,” the prosecutor continued. “He caught her at the gate and hit her head with a rock . . . It wasn’t enough to hit her. He had to ‘finish her off’, as he said to Bill Fuller.

“There is more than enough evidence for you to convict him. The absence of an alibi, the changes in his testimony, the shameless lies of Ian Bailey.

“This was a horrible, barbaric crime by a predator. His writings prove he is a sexual predator. He calculated the quantity of sperm he spent in every imaginable situation.”

Ms Toscan du Plantier “lived through two or three minutes of terror and suffering,” the prosecutor said. “For her family, the nightmare has lasted 22 years.”

The prosecutor asked for the maximum sentence of 30 years in prison. He asked judges to issue a new arrest warrant, in the hope the Supreme Court would reconsider its decision not to extradite Mr Bailey.

“This trial is just one step,” Mr Bonthoux concluded. “I hope that one day soon we will see Mr Bailey in this court, with his lawyers, so we can hold a trial face to face.”