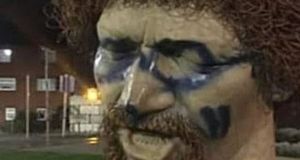 The statue was unveiled on the 35th anniversary of the 43-year-old singer’s death by President Michael D Higgins.

A statue erected in honour of late Dubliners singer Luke Kelly has been vandalised for a second time in seven months.

The statue is one of two placed in Dublin a year ago. It was designed by artist Vera Klute and was daubed with black paint to mimic sunglasses, in addition to marks on the nose and cheek.

Officers are examining CCTV footage from cameras located near Luke Kelly park close to where the singer grew up on Sheriff Street in Dublin’s north inner city.

“I’m calling the individual who did this to Luke Kelly’s statue to show some dignity and respect to his memory and to his family. Not only have you insulted them but you’ve done this to the whole community who treasure this statue.

“Shame on you! I’m calling on whoever did it to come back and clean it up. Luke always carried his community with him around the world. The locals are being tremendous through all of this yet again. Who in their right mind would go out on a stormy night to do such a thing.”

The statue was unveiled on the 35th anniversary of the 43-year-old singer’s death by President Michael D Higgins. It cost €80,000 and is a 1.8m-high marble bust, with copper wire used for Kelly’s trademark beard.