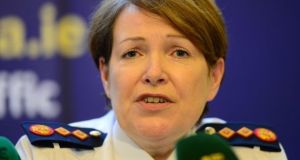 Garda Commissioner Nóirín O’Sullivan: told the Public Accounts Committee last month that the so-called “Cabra account” was being investigated or examined by a number of agencies. Photograph: Dara Mac Donaill

The alleged fraudulent use by the Garda College of European Union monies is now under investigation by OLAF, the EU’s Anti-Fraud Office.

The inquiry follows reports by The Irish Times last month that 5 per cent of the money from CEPOL, an EU agency for law enforcement, may have been diverted to a bank account in Cabra and used for entertainment for gardaí.

The allegations were originally contained in an audit of spending at the training college conducted in 2008, and are also the subject of investigations by the head of the Garda internal audit unit, Niall Kelly.

When asked on Sunday about the OLAF investigation into Templemore, the Department of Justice said it could not comment.

“OLAF is independent in the conduct of its investigations and it would not be appropriate for the department to comment further pending the conclusion of any investigations being undertaken by OLAF,” it said in a statement.

With a substantive investigation now under way, having been escalated from a review or scoping exercise that emerged publicly last month, OLAF has some police-style powers to carry out its inquiry.

It can conduct searches and interview witnesses but cannot compel an EU member state to accept and act on its findings and policy recommendations.

It investigates fraud against the EU budget and any serious misconduct in EU institutions that warrant its attention.

Last month Garda Commissioner Nóirín O’Sullivan told the Public Accounts Committee that the so-called “Cabra account” was being investigated or examined by a number of agencies.

Minister for Justice Charlie Flanagan and the Comptroller and Auditor General, Seamus McCarthy, were also made aware of the allegations, which date back to 1999.

While that PAC meeting took place on Tuesday, June 20th, Mr Kelly had the previous Friday briefed Ms O’Sullivan on his concerns about the Cabra account and possible fraudulent activity related to it.

Ms O’Sullivan requested a report from him, saying it should be ready for the following Monday. When PAC met on Tuesday to question Ms O’Sullivan she had forwarded Mr Kelly’s report to Gsoc.

Given the Garda watchdog was investigating the Cabra account as a result of the report being referred to it, Ms O’Sullivan was unable to answer questions on the issue in any great detail. It was a chain of events that angered some of the PAC members.

A retired senior officer of the force was the most recent signatory on the account but the commissioner stressed the signatories had changed over time. Ms O’Sullivan declined to reveal the identity of the people involved.

1 Sinn Féin’s stand on Covid is facing increasing questions from political rivals
2 Love in a time of Covid: John and Mary marry over 40 years after first meeting
3 Coronavirus: Close contact numbers fall in sign restrictions may be working
4 Two hundred Irish retailers for all your online Christmas shopping
5 Cab investigates behind the massive gates of Chosen Few Motorcycle Club in Dublin
Real news has value SUBSCRIBE