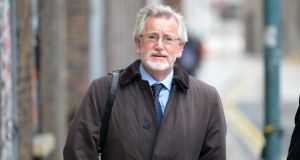 A Ballaghaderreen-based solicitor forbidden from practicing by order of the High Court, has admitted professional misconduct and been told to pay €10,000 into the Law Society’s compensation fund.

Michael Mullooly BL, barrister for Declan O’Callaghan, told the Solicitors Disciplinary Tribunal on Tuesday that his client admitted to “unlawfully retaining client funds”. He had previously denied any misconduct despite a series of allegations from clients of misappropriation of funds.

Mr O’Callaghan ran the Co Roscommon law firm Kilrane O’Callaghan for many years with his wife, office manager Mary Devine O’Callaghan, prior to its closure last December by the Law Society, the solicitors’ professional and representative body.

It was by far the largest practice in Ballaghaderreen and possibly in the county. Mrs O’Callaghan now works at Staunton Caulfield, a law firm run by her and Mr O’Callaghan’s daughter, Aoife O’Callaghan.

The High Court suspended Mr O’Callaghan’s professional certificate in July of last year, ordered him to cease work and banned him from holding himself out to be a solicitor.

The tribunal, which adjudicates allegations of misconduct made against members of the profession, heard that Mr O’Callaghan admitted misconduct in relation to the sale of a house bequeathed by a Ruth Thomson, who died in 2011, to a Gillian Connell.

In handling the transfer of money from the sale of the house to Ms Connell, the tribunal heard that Mr O’Callaghan, who was present for the proceedings, “retained money and failed to provide an explanation”.

The sum concerned was €17,250 but additional costs of some €7,125 had accumulated during efforts by another law firm to have Mr O’Callaghan deal properly with the matter.

Nessa Bird, counsel for the Law Society, told the tribunal that Mr O’Callaghan had made good the discrepancy “but only very belatedly” and after a complaint was made to the society. He had peviously said the proper payment of the money was something that was “simply overlooked” but the Law Society “did not accept that”, Ms Bird said.

This was a serious matter and Mr O’Callaghan had “previous disciplinary history”, said Ms Bird, referring to a 1990 High Court order restricting him on foot of earlier complaints about his professional conduct.

Mr Mullooly said that, in regard to the matters before the tribunal, Mr O’Callaghan “accepts full responsibilities for what has happened”. He wished to apologise “unreservedly” to Ms Connell, counsel said.

While the evidence against him was “strong”, Mr Mullooly said Mr O’Callaghan was living on a “very small pension of €250 a week” and was allowed some money from accounts that had been frozen.

After retiring to consider the case, the three person tribunal — chairman Justin Condon, assisted by Owen Binchy and lay member Kevin Rafter — ruled that, in the words of Mr Condon, “there is really no proper explanation for what happened”. He said the tribunal members did not accept Mr O’Callaghan’s assertion that he simply overlooked giving the money to Ms Connell.

The tribunal ruled that Mr O’Callaghan be censured, directed to pay €10,000 to the Law Society compensation fund within a year and €7,500 in costs.

The ruling will be presented to the president of the High Court who will rule on any application the Law Society may make regarding Mr O’Callaghan’s permanent removal from the register of solicitors.

Barry Cowen tells Dáil he is profoundly sorry for ‘stupid’ drink driving offence 23:16
US lawyer says he has received ‘very promising lead’ in Annie McCarrick case 22:15
Green Party leadership says it will pull the plug on Government if agenda is not met 22:15
Debenhams Ireland has treated workers in ‘shabby’way, says Martin 22:11
Driver whose car ‘rolled nine metres’ into front of other vehicle loses rear-ending claim 21:49

1 Passenger who promised driver a ‘few quid’ after crash awarded €10,000
2 Miriam Lord: Minister for Agriculture tries to get himself out of the manure
3 Barry Cowen tells Dáil he is profoundly sorry for ‘stupid’ drink driving offence
4 Driver whose car ‘rolled nine metres’ into front of other vehicle loses rear-ending claim
5 Coronavirus: One more death and 24 new cases reported in the Republic
Real news has value SUBSCRIBE