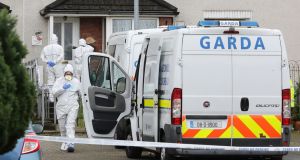 Forensic officers at a house in Shanabooly Road in Limerick where the body of an 11-year-old boy was discovered on Sunday evening. Photograph: Niall Carson/PA

Gardaí in Limerick city have started a murder investigation after a postmortem confirmed that an 11-year-old boy was fatally stabbed on Sunday.

The boy, named locally as Brooklyn Colbert, was found in a house in an estate in Ballynanty, on the north side of the city. The discovery followed a man aged in his mid-20s, who was known to the boy, presenting himself at Henry Street Garda station in the city.

The man was arrested shortly afterwards and was being questioned by gardaí in connection with the killing last night. Sources said the man was observed on Sunday evening walking with the boy near to the house where he was found dead.

Members of the Garda Technical Bureau travelled from Dublin to Limerick to forensically examine the scene on Monday. The boy’s body had remained at the house overnight and a pathologist visited the scene to carry out a preliminary examination before his remains were taken to University Hospital Limerick.

A postmortem was carried out there by Assistant State Pathologist Dr Margot Bolster and sources said it confirmed that the boy had died as a result of multiple stab wounds.

Detectives conducted house-to-house inquiries in the Ballynanty area on Monday in an attempt to piece together the boy’s last movements.

Chelsea Smyth, a local woman who knows the boy’s family, said the community was in shock over the news as “things like this don’t normally happen” in the area. “It’s hurtful to hear of the loss,” she said. “We hear of these things in movies, not literally across the road from you.”

Ms Smyth described Brooklyn as “a lovely little boy. Him and his mam, it was just the two of them, he was the apple of her eye. It’s very sad and very shocking.”

Another local woman said: “It’s a terrible thing that’s happened. I don’t even know how to put it into words.”

Sinn Féin Cllr Sharon Benson said the news was “absolutely devastating”. “When I heard the news last night my stomach sank,” she said.

The boy’s mother, named locally as Sonia Aylmer, was being supported by friends and family as well as a Garda liaison officer. Brooklyn had been due to return to John F Kennedy Memorial School following the mid-term holidays.

“The club will be looking at organising counselling sessions for his team-mates. There are devastated children who couldn’t go to school today, they were so upset,” said a club source. “Brooklyn was a very quiet lad when he joined our soccer team in 2018, but he had come out of his shell. He loved the game, the club is utterly shell-shocked.”

Gardaí appealed to anyone who saw anything suspicious in the Shanabooley Road, Ballynanty or Moyross areas between 4pm and 7pm on Sunday or who may have information in relation to the investigation to contact Mayorstone Park Garda station on 061-456989, the Garda Confidential Line on 1800-666 111 or any Garda station.