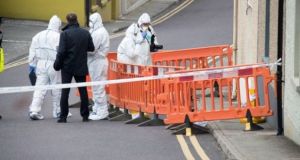 A 32-year-old man has been arrested and charged in connection with the murder of John Ustic, who was killed in west Cork in September 2017.

Mr Ustic, a 51-year-old English national, was found dead at his rented terraced house at High Street in Skibbereen from injuries sustained in an assault.

Mr Ustic was found with serious head injuries in a car park near his home in Skibbereen but managed to make it back to his rented house on High Street where he later died.

On Tuesday, Det Garda Daniel Lordan said how he charged Mr Fitchett with an offence of impeding the apprehension or prosecution of another for the murder of Mr Ustic on September 24th, 2017.

The charge, which is contrary to Section 7(2) of the Criminal Justice Act 1997, states that Mr Fitchett impeded the apprehension of another person not before the courts for Mr Ustic’s murder.

Det Garda Lordan told the court that Mr Fitchett of The Moorings, Skibbereen made no reply to the single charge when he put it to him this morning after arresting and cautioning him.

Sgt Paul Kelly for the State said that the Director of Public Prosecution had directed that Mr Fitchett should be tried on indictment on the impeding charge at the Central Criminal Court.

Defence solicitor Eamon Fleming said that he understood that gardaí had no objection to his client obtaining bail, but the charge was such that bail could only be obtained in the High Court.

Sgt Kelly confirmed gardaí were not objecting to bail and Mr Fleming said that he planned to make a bail application for his client at the High Court later this week.

Judge James McNulty acknowledged that he had no jurisdiction when it came to granting Mr Fitchett bail and he remanded him in custody to appear again at Skibbereen District Court on November 12th.

Judge McNulty also granted Mr Fitchett free legal aid after being informed by Mr Fleming that his client was in receipt of a government jobs subsidy.

A native of Cornwall where he has a daughter, the late Mr Ustic had been living in the rented two-storey terraced house on High Street in Skibbereen for several months prior to his death.

Mr Ustic, who was well-known among the British ex-pat community in West Cork, had previously lived in Bantry and Drimoleague and in Co Tipperary after moving to Ireland from the UK in the mid 2000s.