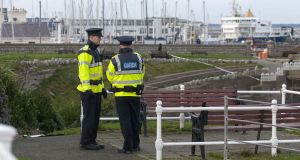 Gardaí at the scene at Dún Laoghaire, Co Dublin, of the assault on Stephanie Ng in December 2017. File photograph: Dave Meehan

A teenager has been sentenced to 11 years for cutting the throat of a young woman in Dún Laoghaire and leaving her to die.

The boy was 15 and suffering from severe mental illness when he made contact with Stephanie Ng, who was 25, on a social media app and arranged to meet up with her.

At the Central Criminal Court, Mr Justice Michael White said the attack was “preplanned and premeditated”. There was evidence of a “determined strategy” to entice Ms Ng to an isolated location where he carried out the “cold, calculated” assault.

The boy, who cannot be named, inflicted a 10cm deep wound across Ms Ng’s neck which cut 75 per cent of her windpipe. When she regained consciousness she found the boy had also cut a tendon in her hand.

The boy “destroyed” her life, Ms Ng told the court. “When they told me your age, my head spiralled in confusion trying to understand how someone your age can have such evil intention,” she said.

The accused suffered from hallucinations and urges to harm or kill others in the months before the attack, his mother told The Irish Times. She said she tried to get him inpatient treatment but was told there were no beds available.

Taking into account the boy’s mental condition and his age, the judge said the 11-year term will be reviewed in 2023 at which point the boy will have been in detention for five years.

It will then be up to a judge to suspend some or all of the remainder of the sentence depending on the boy’s progress in custody. Mr Justice White noted there is no specific legislation dealing with minors who commit homicide offences.

He said he would have imposed a partly suspended sentence which would allow the boy to be monitored in the community but this was not permitted by the current legislation.

The Children’s Rights Alliance said there was an ongoing problem with a lack of services for children with severe mental health problems. “These kind of events can happen if you don’t intervene on time,” said its chief executive, Tanya Ward.

The Lucena Clinic in Wicklow, which was treating the boy, carried out a serious incident review following the attack which did not flag any issues with his treatment.