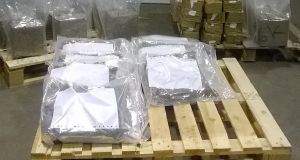 Part of the cannabis seized at Dublin Port on Wednesday. Photograph: Revenue

Ccannabis worth an estimated €2.45 million was seized at Dublin Port on Wednesday, Revenue said.

The drugs were discovered on Wednesday night in crates in a truck that had disembarked the evening ferry arriving from Holyhead, Wales.

Following a positive indication on the truck by Holly, Revenue’s drugs dog, the detection was made by a mobile X-ray scanner.

The crates contained 376kg of cannabis resin and 9.7kg of herbal cannabis.

A 41-year-old man from Northern Ireland was arrested and is being held at Store Street Garda station.

Revenue said the seizures were intelligence-led and made with the assistance of the Garda National Drugs and Organised Crime Bureau and the Special Crime Task Force. Investigations are ongoing with the co-operation of the Police Service of Northern Ireland.