Teenager hit by golf ball on first green to receive £125,000

Action against Portstewart golf course settled without admission of liability 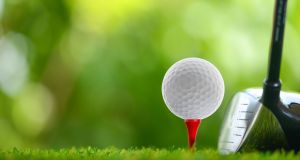 Part of the action centred on claims that insufficient warning signs were in place at the time. Photograph: iStock/Getty Images

A teenage golfer hit on the head by a stray ball is to receive Stg £125,000 in damages.

He sustained a severe injury in the accident shortly into his round at Portstewart Golf Club’s Riverside Course on the north coast ten years ago.

His action was settled at the High Court in Belfast on the basis that the club’s insurers will make the pay-out.

The resolution involves no admission of liability.

The plaintiff, who was still a school at the time of the incident in 2007, is not being named.

He was on the first green when a ball played from another part of the course struck him on the head, according to lawyers in the case.

Proceedings were issued against the Trustees of Portstewart Golf Club, alleging negligence.

Part of the action centred on claims that insufficient warning signs were in place at the time.

But following negotiations a settlement was reached in the lawsuit.

The club is to pay the plaintiff £125,000 plus costs, under the agreed terms.