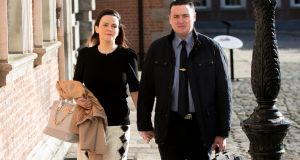 A Garda whistleblower has denied at the Charleton tribunal he had threatened to ‘burn’ his partner, as she claimed in a statement of complaint against him.

The statement, which was made by Garda Keith Harrison’s partner Marisa Simms at Letterkenny Garda station in October 2013, was referred to GSOC and Tusla.

It was later withdrawn by Ms Simms.

In its current module, the tribunal, which is chaired by Supreme Court judge Mr Justice Peter Charleton, is looking at contacts between An Garda Síochána, Tusla and Garda Harrison.

On Thursday, tribunal barrister Pat Marrinan SC went through several text message exchanges at the end of September 2013 between Ms Simms and Garda Harrison. During this time, she had moved in with her sister following an argument with him.

Garda Harrison said Ms Simms had left the house voluntarily after the argument. “I have never put or directed or told Marisa to leave the home,” he said.

In the text message exchange, Garda Harrison asked Ms Simms what was wrong and asked her to come back to him.

In her responses, she referred several times to how he had “threatened to burn” her.

Garda Harrison denied this. “In relation to the threats to burn, they did not happen,” he said.

He agreed that he had earlier cheated on Ms Simms, on one occasion while she was in hospital when she lost a baby in an ectopic pregnancy.

“I didn’t behave appropriately, Mr Chairman,” Garda Harrison said. “This was actions I’m not proud of, and I wish I hadn’t done, but I did them.”

“It was never intended as emotional abuse, but I didn’t think,” he said.

Garda Harrison said he was deeply ashamed of how he had hurt Ms Simms at the time.

Garda Harrison said he had asked for the tribunal, although he knew private and embarrassing details of his life would be made public.

He said that after Ms Simms made a statement to gardaí ­ on October 6th, 2013, he “wasn’t worried about the content of that statement because I knew that I had done nothing wrong.”

In a statement at the time, Sergeant Paul Wallace recorded that he was told by Garda Harrison on October 7th, 2013, that Chief Superintendent Terry McGinn had come into the room while Ms Simms was making her statement and said, “No guard’s to treat women like that. I’ll see to that.”

Earlier, Ms Simms told the tribunal she had not seen Chief Supt McGinn at all during her time at the Garda station.

Garda Harrison said that although he had said things he should not have said, he did not threaten Ms Simms. He said the text messages in which she spoke about threats he had made to burn her were sent to hurt him, but they were not true and he had never threatened that.

Garda Harrison said he had no recollection of a meeting on April 24th, 2012 about his use of the Garda Pulse computer system. He said he had a meeting with now-retired Chief Superintendent Jim Sheridan about his car insurance.

“We spoke about the car, that was it,” Garda Harrison said.

The tribunal chairman asked why the chief superintendent would not talk to him about Pulse, when he knew Garda Harrison was using the system to check on his girlfriend.

He said he believed senior officers were checking up on Ms Simms on Pulse, and seeking information on where Garda Harrison was living.

Earlier, Ms Simms told the tribunal she would prefer if she did not have to be there.

“We want peace and we want to be left alone to get on with our lives,” Marisa Simms told the inquiry on Thursday.

In the current module, the tribunal is looking at contacts between An Garda Síochána, Tusla and Garda Keith Harrison.

Ms Simms said the past few years had been extremely stressful and worrying.

“It’s not just about a 15 minute visit from a social worker, its the knock-on effect on me as a mother,” Ms Simms said.

She said Garda Harrison had a good relationship with her children, and treated them as his own.

Questioned by Garda Harrison’s barrister, Mark Harty SC, Ms Simms agreed that in its early years, their relationship was “turbulent”.

Mr Harty said that of all the internet searches on her phone the day after she made a statement of complaint to gardaí­ about Garda Harrison on October 6th, 2013, 31 were about medical issues, and only two were about harassment.

Both of these searches were about gardaí ­ losing their jobs, not about people being prosecuted for harassment, Mr Harty said.

Ms Simms said she had felt tired that day, and had not fully recovered from surgery the previous summer. “To be honest the whole day was kind of blurred. I wasn’t really myself,” Ms Simms said.