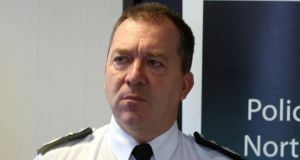 Relations between police in the Republic and Northern Ireland will not be soured by the findings of the Smithwick report, the PSNI chief constable has said.

Matt Baggott told the Policing Board that day-to-day co-operation, including the sharing of intelligence and information with An Garda Síochána, would continue despite the damning revelations of collusion between some gardaí and members of the IRA.

Mr Baggott said: “Our relationships and our co-operation with the guards is excellent.”

Chief Supt Harry Breen and Supt Bob Buchanan were murdered on March 20th, 1989 near the border in south Armagh, shortly after a meeting with gardaí in Dundalk, Co Louth.

An eight-year tribunal led by Judge Peter Smithwick found an IRA mole in the Garda station had tipped off the terrorist hit squad.

Mr Baggott said he would be travelling to Dublin within the next few days to discuss the way forward with senior Garda officers and Justice Ministers David Ford and Alan Shatter.

But he claimed countless lives had been saved by the seamless cross-border strategy.

Mr Baggott added: “I know they (Garda) will be sad about the report, they will be studying it for themselves.

During the public meeting at the Policing Board headquarters close to Belfast city centre, DUP MLA Jonathan Craig called for Garda Commissioner Martin Callinan to apologise to the bereaved Breen and Buchannan families.

He also claimed an apology was also owed to PSNI Assistant Chief Constable Drew Harris whose evidence to the Smithwick Tribunal was slated as nonsense by Garda legal representatives.

Mr Craig said: “Really what happened was almost abusive towards the evidence that was given by Drew Harris.”

Speaking after the meeting, Mr Baggott rejected claims of political expediency over his comments about relations.

He said: “Inquiries are always meant to be challenging and robust processes. That’s about trying to find the truth and sometimes they can be very adversarial. The way that the An Garda Siochana legal team deal with that (tribunal) is really a matter for them. The judge has made comment on that.

“I am very pleased that the integrity of the PSNI has been acknowledged by the judge. Sometimes intelligence can be live but also about the past and we were quite right to provide that to the inquiry itself.

“But let me say this, our relationship with our colleagues in the south is excellent. We have both a friendship and professional respect. They have saved countless lives over the past months and years on our behalf and our working relationship has never been better.”