Raids have taken place in Limerick, Clare and Tipperary under Operation Coronation 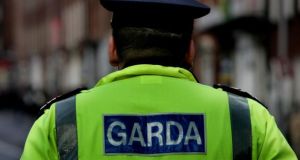 Gardaí in Limerick have made seizures and arrests in a large-scale operation targeting organised crime. File photograph: Eric Luke

Gardaí in Limerick have made further seizures and arrests in a large-scale operation targeting the activities of the Keane-Collopy organised crime gang.

Six people were arrested on Wednesday evening during follow-up searches under Operation Coronation and three high-value cars were seized “along with evidence of the accumulation of wealth from suspected drug trafficking,” the Garda said.

Eleven bank accounts were also frozen while €40,000 in cash and “evidence relating to the sale and supply of controlled drugs” were confiscated. A fourth car was seized for having no insurance.

On Saturday morning gardaí searched a waste ground in Prospect, Co Limerick where they found two firearms and an extendable “Taser baton” concealed in plastic wrapping.

Operation Coronation was established by gardaí to target the Keane-Collopy gang, which has been involved in drugs trafficking in Limerick and the west for many years.

The gang formed one side in the Limerick feud with the McCarthy-Dundon gang which ran for about 10 years and claimed up to 20 lives.

The operation began in the early hours of last Wednesday with 67 raids taking place across Limerick, Clare and Tipperary and 14 people being arrested.

About 170 gardaí from the Garda divisions across the three counties carried out raids supported by armed gardaí from specialist units – the Emergency Response Unit and Armed Support Unit — and colleagues from a number of Dublin-based units specialising in tackling organised crime.

The search was also backed by significant support from the Defence Forces, including an Defence Forces helicopter and Army bomb disposal experts and search engineers.

The Criminal Assets Bureau (Cab) was also involved along with the Garda Drugs and Organised Crime Bureau and the National Bureau of Criminal Investigation, the Garda’s serious crimes squad.

Two cocaine presses were seized and gardaí said the gang was bulking up pure cocaine and repackaging it for sale.

Gardaí also seized approximately €220,000 in cash including some sterling and UAE dirham as well as Irish punts. One vehicle, valued at € 50,000, and jewellery and luxury watches with a combined value of €100,000 were confiscated by Cab, along with the deeds to a property in Dubai.

Designer clothing was confiscated along with financial documents relating to bank accounts and the purchase of property, with about €119,000 in two bank accounts frozen. As well as the cocaine presses, some €23,500 worth of illicit drugs was also found, including cannabis, heroin and crack cocaine.

“Operation Coronation was established to target organised criminality in Limerick city and its environs,” Garda Headquarters said in a statement.

“This operation is targeting organised extended criminality, drug trafficking and the financial returns achieved from this type of activity through money laundering.”

It said the operation was co-ordinated by Limerick gardaí with the assistance of national units, “to address the accumulation of wealth by those engaged in serious and ongoing criminality”.

“The targeting of the gang criminals forms part of the Limerick Divisional crime strategy and was conducted under the new divisional policing model, which is reducing the number of Garda divisions around the Republic and increasing the serious crime investigation function in each enlarged division.”

Twenty people have been arrested to date under Operation Coronation. Of these, 10 have been charged with the drug dealing or trafficking and three have appeared before the courts on previous warrants.

Five people arrested on money laundering offences have been released with a file being prepared for the Director of Public Prosecutions (DPP). Two others accused of drugs possession and drink driving have also been released pending a file to the DPP.