Sharp increase in break-ins across parts of Dublin and hinterland 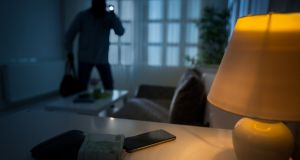 A heavy Garda presence in Dublin’s north inner city and Drogheda appears to have had a significant impact on burglary rates in the two areas during 2019. File photograph: Getty

There were significant increases in the number of burglaries in parts of Dublin and its wider commuter belt last year, despite an overall drop in the incidence of the crime nationally.

An analysis of official crime figures published recently by the Central Statistics Office (CSO) show a sharp rise in burglaries in west Dublin as well as some counties surrounding the capital.

The most significant increase was in Wicklow where numbers rose by 37 per cent to 681 and Westmeath, up 25 per cent to 309.

Other counties to buck the national trend included Donegal, up 16 per cent to 262 and Kildare with an increase of 9 per cent to almost 1,000.

Overall there was a 1.1 per cent reduction in the number of burglaries reported to gardaí last year – down 194 to 16,772.

It is the lowest recorded figure in almost 20 years for break-ins to residential and business premises, which peaked in 2012 with almost 28,500.

Gardaí have attributed the downward trend in burglaries and other property-related crime in recent years to the impact of Operation Thor which was introduced in November 2015 and targeted criminal gangs and repeat offenders.

The CSO figures, which are based on offences recorded on the Garda Pulse system, show the number of burglaries increased in 12 of the 28 Garda divisions last year.

They include four of the six Garda divisions in Dublin where burglaries were up by 1 per cent. The biggest increase was recorded in the city’s western suburbs.

The total number of break-ins in the Dublin West division which covers areas including Blanchardstown, Finglas, Clondalkin, Ballyfermot and Lucan during 2019 was 1,812 – the biggest number anywhere in the Republic. The figures were up almost 300 on 2018 – an annual increase of 18 per cent. The number of burglaries reported in the Clondalkin area alone jumped by 52 per cent to 307. The station in Blanchardstown recorded the most break-ins anywhere in the Republic last year with 514 – up 14per cent over the previous year.

Taoiseach Leo Varadkar raised the problem of a high number of burglaries in the area, which covers his Dublin West constituency, with Garda Commissioner Drew Harris at the end of 2019.

Local Fianna Fáil TD Jack Chambers said the scale of the increase in the Dublin West division was “concerning”. But he acknowledged that a large Garda operation had been mounted to combat the problem.

Mr Chambers said it showed the extent of a wave of burglaries which “terrorised” the area, particularly over the winter months.

“We need to ensure that high-visibility patrols and gardaí out on the beat in communities is maintained so that people can feel safe and secure in their own homes,” he added.

The effect of a heavy Garda presence to tackle gangland feuds in Dublin’s north inner city and in Drogheda also appears to have had a significant impact on rates in the two areas during 2019.

There was a 23 per cent reduction in the Dublin North Central division last year – the biggest reduction anywhere in the country – and where large numbers of extra gardaí have been deployed as part of efforts to combat the feud between the rival Kinahan and Hutch gangs.

Similarly, there was a 22 per cent fall in burglaries in Co Louth in 2019 with the most significant reduction in Drogheda where gardaí mounted a special operation to counter the threat by feuding drugs gangs.

Other divisions where figures fell in excess of 15per cent last year were Cork West, Mayo and Clare.