Scale of tragedy, depth of distress too big to process 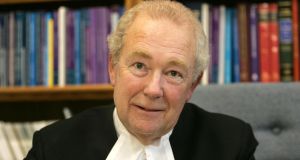 Mr Justice Nicholas Kearns, one of the three judges, who handled proceedings with delicacy and tact, as the evidence proceeded swiftly 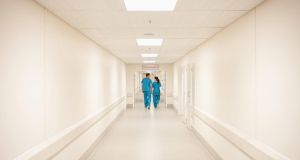 Her father looks out into the court and inclines his head towards the microphone. “My daughter’s dead,” he says softly. “I just want her to have dignity, to be put to rest.”

To his right, three judges, headed by Mr Justice Nicholas Kearns, their expressions serious and solemn.

To his left, 17 lawyers, squeezed into three rows of seats, and a public gallery filled with more barristers, some doctors and a smattering of onlookers.

Not for the first time, the room falls silent.

The scale of the tragedy, the depth of the distress, seem almost too big to process. Scarcely can a court hearing have felt more pared back, more intense. The atmosphere is grave and purposeful, and it seems heightened by the unfamiliar surroundings.

This is an out-of-term sitting; absent are the gowns and wigs and the trappings of ceremony. Absent too the showmanship, the theatrics: the noise, in other words. Nobody reacts much other than to shake a head, shed a tear or stare off into the distance.

The judges handle proceedings with delicacy and tact, and the evidence proceeds swiftly. We hear from the woman’s father, who describes seeing his daughter on life support and feeling she didn’t look like herself. Her children know she is sick; they’ve been told the nurses are “looking after Mummy until the angels come”.

We hear from her partner, who tells the court she was happy to be pregnant and that they were planning to move in together. They had talked about names for their baby.

We hear from seven consultants specialising in neurology, obstetrics and intensive care. None argues against switching the machine off. “I don’t believe this unborn can survive,” says one intensive care specialist. “I would be firmly of the view that the appropriate thing to do is not to continue support,” says an obstetrician. “If it were to be continued, we would be going from the extraordinary to the grotesque.”

That was uppermost in the minds of the woman’s doctors. At one point, a treating neurologist recounts, he and a colleague sat down together and tried to “figure out” the Eighth Amendment.

“We were very uncertain about the legal standing. We didn’t know.”

He describes having to approach the woman’s distraught family and tell them that he couldn’t fulfil their request to switch off life support for legal reasons.

In the public gallery, family members hold their hands over their mouths.

Legal submissions will be made by lawyers for each of the parties on Christmas Eve. Lawyers for the woman’s father will argue that the Eighth Amendment is not applicable or engaged in this case. They will say that the purpose of the amendment, inserted by referendum in 1983, was to protect the unborn from abortion, not to retain a brain dead woman on life support when medical evidence suggests that there is no real likelihood of a foetus reaching viability.

The court will also hear from lawyers representing the interests of the unborn and the mother.

In a hospital’s intensive care unit, meanwhile, nurses are watching over the body of a woman who was declared brain dead at 5.20pm on December 3rd. At that moment, in the words of one medic, she became a corpse.

Her picture stands by her beside, but she bears “not a whole lot of resemblance” to it, according to Dr Frances Colreavy, an intensive care specialist who visited her. Make-up has been applied to her face because her children came to see her, but the swelling of her eyes is so bad that they do not close. The children found it distressing.

She is connected to a life-support machine and six syringe pumps. She is being fed via a tube through the nose.

Her condition is deteriorating rapidly. She has ongoing infection, presumed to be pneumonia, and her temperature is a high 38 degrees. She appears puffy, her blood pressure is fluctuating and her abdomen shows signs of inflammation and discolouration. She has an open head wound and the brain appears to the naked eye to be rotting. Blood flow to the brain has stopped. Asked whether it was realistic to continue life support, Dr Colreavy replied: “I don’t think that is possible or to be recommended.” Already, she said, they were in the realm of experimental treatment.

The court rose just before 4.30pm. Lawyers chatted quietly among themselves. Reporters tap-tapped on their laptops. Doctors shook hands with the family and wished them well. Quietly, the room emptied and the crowd fanned out into the darkness.