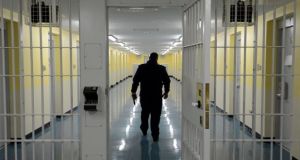 Prison inspections are set to become a deeper and more forensic exercise in the Republic. Photograph: Cyril Byrne/File

A more “robust and ambitious” system of prison inspections for the Republic is about to start but the power to investigate how prisons are being managed and operated needs to be enhanced, the Inspector of Prisons Patricia Gilheaney has said.

Prisons and prison staff, of all grades, would be consulted during the new system of inspections. Furthermore, only when there was a 90 per cent satisfaction rate about the inspections among prisoners and staff would her office deem its new procedures as “successful”.

The proposals have been set out in Office of the Inspector of Prisons Strategy Statement 2020-2023 published by the Department of Justice on Tuesday. General inspections, during which all or any aspect of a prison building or regime could occur, would be unannounced.

Thematic inspections would be more specific and could inspect solitary confinement, prison safety, prison restraint and staff well-being would typically involve advance notice. Functional inspections would examine matters like human resources, prison finance and governance and would also be announced. Ms Gilheaney said her office already carried out inspections and investigations into deaths in custody while also being charged with carrying out any investigation requested by the minister for justice of the day.

“The Inspector may, of her own volition, investigate any matter arising out of the operation or management of a prison. However, the associated powers vested in the inspector to carry out this role are limited and require enhancement,” she said. Under the new inspection plans, which were finalised and put in place at the end of last month, every prison in the State would undergo a general inspection at least once every five years.

While inspections of prisons are set to become a deeper and more forensic exercise, a formalised system of follow-up and oversight is also being implemented by the Office of the Inspector of Prisons, known as the inspectorate. It now plans to record and publish the recommendations it makes in its inspection reports. It will then seek an action plan from the Irish Prison Service for addressing the issues raised in relation to each prison.

The final phase of each prison inspection will involve monitoring, and reporting on, the prison services actions or otherwise in acting on its recommendations.

“The importance of delivering a robust programme of inspection throughout all of Ireland’s prisons, guided by an Inspection Framework based on international good practice cannot be understated,” she said.

In its new three-year strategy, the inspectorate as set out a vision for itself that involves “a robust, preventative regime for the inspection of prisons in Ireland, and the investigation of deaths in custody, or other investigations relating to the management or operation of a prison”.

It has also prioritised the creation of “public assurance regarding the handling of complaints”, including made by prisons. Ms Gilheaney has also identified the pending ratification by Ireland of the Optional Protocol to the Convention against Torture as a key area that her office and the Irish prison and justice systems must prepare for.

The UN’s optional protocol seeks to prevent torture and ill treatment and when ratified by the Government, as promised under the lifetime of the current Coalition, it will bring added responsibilities. These relate to visits and inspections by national and international groups at Irish prisons.