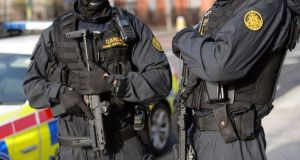 Assistant Garda Commissioner in charge of organised crime John O’Driscoll has said that he would like to have the funds spent on free legal aid for criminals to spend on the budget for Garda overtime.

“In many cases those who are charged will be provided with free legal aid by the State, that is not a matter for the Garda Síochána. Among the successes we’ve had in special crime operations in recent past has been those trials relating to the Anglo Irish Bank scenario and the huge cost involved in terms of the legal expenses is something that I have noted and when I look at the overtime budget that I have to deal with those very difficult cases, it sometimes is a situation where I would like to have access to the level of funding that is available elsewhere,” he told Newstalk’s Pat Kenny show.

“Unfortunately we have to work within the means we have. We have to achieve our results, obviously those results will only be achieved where those who we accuse and who go to trial are defended, that’s the way the system works.”

The assistant commissioner said he believes the gardaí­ are on the road to achieving great success in dealing with organised crime especially as their network of international contacts grows.

He said that since the Regency shooting the level of success at tackling organised crime has been exceptional. An Garda Síochána has built up a network of contacts at international level, so organised crime can be tackled at every level.

“Obviously we have kept an eye on people,” he pointed out there were a number intelligence led operation which have resulted in convictions, “so there has been a huge level of success”.

The establishment of CAB, following death of Veronica Guerin, has proved a very essential tool in tackling organised crime, he added.

“We believe we are having an impact.”

He said that after Veronica Guerin’s murder in 1996 many criminals went abroad and discovered more lucrative markets there, “from there they have since been serving the Irish market.

“Part of the problem is the ease with which they can operate at international level, that’s why we are putting great emphasis on the international cooperation aspect of tackling organised crime. There have been major successes in Ireland and the UK and Spain. We have built up significant levels of cooperation.”

On the issue of decriminalisation of drugs, he pointed out that tobacco is a commodity that criminal gangs will trade in. “Decriminalising drugs does not mean that organised crime groups will not be involved in sale and supply of commodities,” he warned.

“A decade ago there were 68-69 murders per year, the average number of murders between 1972 and 2016 was 49, in the last two years, it was 42, the year before 44. We’re making a significant impact on the activity of organised crime gangs.

“After the Regency there was this prediction that there would be an increase in the number of murders, we have intervened on 59 occasions in relation to threat to life incidents.

“We have taken people off the streets who were about to murder, one of the problems that that presents now is that there is a wing of one particular prison in Ireland that has so many of these personnel from organised crime groups that they have difficulties in controlling those people.”

Mr O’Driscoll said he was disappointed when the Regency trial collapsed, “from the perspective of people who put a lot of effort into a criminal trial.

“Look at the recent conviction of Freddy Thompson and the comments of the judge that the quality of this investigation was second to none. I sat through some of the evidence of that case and to see the detail, the forensics, the use of CCTV to follow people for many hours and to patch together CCTV from a whole range of sources, was a particular achievement.”

He added that the conviction of Imre Arakas, an Estonian national, was going to have an impact on further cases because of evidence on his Blackberry device.