Hand luggage with €100,000 cash intercepted in separate operation at airport 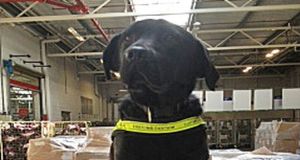 Elvis the Revenue detector dog who, along with his colleague Stella, was part of a joint intelligence-led operation involving Revenue’s Customs Service and An Garda Siochána. Photograph: Revenue

Revenue officers have seized €100,000 in cash as well as large quantities of alcohol and cigarettes in separate operations in Dublin and Laois.

More than 192,000 unstamped cigarettes, 10kg of tobacco and more than 1,960l of alcohol were found when officers carried out a search under warrant of a house in Durrow, Co Laois, on Tuesday.

The detections were made with the assistance of Revenue detector dogs Elvis and Stella and were part of a joint intelligence-led operation involving Revenue’s Customs Service and An Garda Síochána.

The alcohol products have an estimated retail value of over €41,000 with a potential loss to the exchequer of €31,000.

A man in his 30s was questioned at the scene. Investigations are ongoing with a view to prosecution.

These seizures are part of Revenue’s ongoing operations targeting the shadow economy and the supply and sale of illegal tobacco and alcohol products.

Separately, a man in his 40s and a woman in her 30s travelling to Budapest via Dusseldorf were stopped and searched by Revenue Officers in Dublin Airport on Wednesday.

The cash was found hidden in hand luggage. Revenue officers seized the €100,000, suspecting it to be the proceeds of criminal activity or intended for use in such activity.