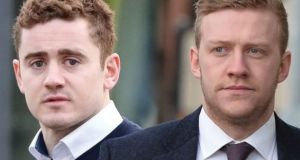 Paddy Jackson and Stuart Olding, who were both acquitted. A number of media outlets had challenged reporting restrictions

Lawyers representing four men involved in the high-profile case told a brief hearing at Belfast Crown Court they had no objections.

Judge Patricia Smyth said: “The only order that I need to make is that the prohibitions are now discharged. I make that order forthwith.

“The other prohibitions will fall away by statute.”

A number of media outlets had challenged the reporting restrictions which barred publication of any legal argument or applications made in the absence of the jury.

Such restrictions usually fall away when a trial concludes because the risk of prejudicing a jury no longer exists.

But when the trial concluded two weeks ago Judge Smyth indicated they would remain in place.

Paddy Jackson (26) and his Ireland and Ulster teammate Stuart Olding (25) were unanimously acquitted of raping the same woman after a nine-week trial at Belfast Crown Court last month.

Mr Jackson was also found not guilty of sexual assault.

The players’ friends Blane Mcllroy (26) and Rory Harrison (25) were also unanimously acquitted of lesser charges connected to the alleged incident in June 2016.

Gerry Simpson QC, representing a number of print and broadcast news organisations, said: “Our application is that there is no longer any prohibition in reporting any matter which occurred in open court.”

Frank O’Donoghue QC, representing Mr Olding said: “The defendants are all now in a position to consent to the application.”

Judge Smyth added: “Everyone is in agreement that the application should be lifted.”

Meanwhile, restrictions preventing publication of the identity of a number of witnesses linked to the complainant remain in place at this stage.

Mr Simpson said he intended to take instruction on whether or not this would be challenged.