The life and crimes of Brian Rattigan 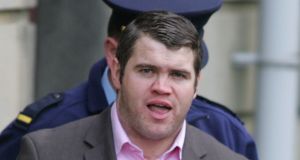 Brian Rattigan of Cooley Road, Drimnagh, Dublin, who has won his Supreme Court appeal against his conviction for the murder of a man in Dublin more than 16 years ago. Photograph: Collins Courts

Having won his appeal against a murder committed 16 years ago, Brian Rattigan remains in Portlaoise Prison.

The wing where his cell is located is reserved for the most dangerous gangland criminals in the country.

However, despite the high profiles of many of the men around him, Rattigan remains one of the most notorious. That he has “achieved” such a status, despite spending almost all of his adult life in prison, speaks volumes.

Now aged 38, Rattigan has been in prison for more than 14½ years.

He was the leader of one of two gangs who engaged in what became known as the Crumlin-Drimnagh feud.

Rattigan was convicted in 2009 for the stabbing murder of Declan Gavin (21) in Crumlin in August, 2001. He was jailed for life. His successful appeal yesterday was against that conviction.

The murder of Gavin was the first killing in the Crumlin-Drimnagh feud, which claimed 16 lives over the following decade. The two factions involved had previously worked together in the drug dealing trade.

However, in March 2000, gardaí raided a room in the Holiday Inn on Pearse Street in central Dublin, and found almost 50,000 ecstasy tablets and 2kg of cocaine.

Gavin was one of the three men mixing the drugs in the hotel room but he was not present when gardaí arrived on the scene. The other men were charged and convicted, leading to allegations that Gavin was an informer.

The group split into two factions. One side formed around Gavin and another man who cannot be named for legal reasons. The opposing faction formed around Drimnagh brothers Joseph and Brian Rattigan.

The faction opposing the Rattigans would prevail in the long run. And its leading members are now linked to the Dublin-based section of the international Kinahan cartel, which has since become embroiled in a feud of its own.

In the early days of the Crumlin-Drimnagh dispute, Brian Rattigan was wounded in the stomach in a gun attack. He escaped the gunman by jumping through an upstairs window at his home; on Cooley Road, Drimnagh, in 2002.

In July of the same year, his brother Joseph Rattigan was shot dead. He was 18.

By February of 2003, Brian Rattigan was in prison. He was on bail for a series of violent offences and drug crime but this was revoked in February 2003, when he offended again. He fired shots at a Garda car during a high-speed chase in Inchicore.

Not long after going to prison in 2003, the first of the many charges outstanding against him went to trial; resulting in a six-year term for drug dealing. Soon after Rattigan was jailed for three years for his role in a group attack on a taxi driver in Dublin city centre in April 2000.

It meant by the time he eventually went to trial and was convicted in 2009 for Declan Gavin’s murder, he was already serving a cumulative 13 years.

Rattigan has used smuggled phones in jail to continue directing organised crime despite being on the gangland landing in the State’s only maximum security prison.

In June, 2008, he was linked to a €1 million drug seizure in Dublin. In 2013, he was convicted of directing that drug deal from his prison cell and jailed for 17 years; a sentence backdated to June 2008, when the drugs were found.

Allowing for remission of 25 per cent which all prisoners are entitled to, Rattigan has just over 3½ years remaining on that sentence.

Following his successful appeal against his conviction for the murder of Gavin, the 17-year drugs sentence is now the only thing keeping him in prison. The State can apply for a retrial in the case.

Were a fresh conviction for murder to be secured, Rattigan could be kept in prison indefinitely, until the minister for justice of the day approves his release.

If not, Rattigan is on the home stretch of what will eventually be a continuous 18½ years in jail.