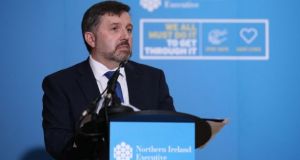 A Co Down man has been charged with threatening to kill the Northern Ireland Health Minister Robin Swann.

William Herbert Hawkes (43) was charged at Newtownards Magistrates Court on Thursday with making a threat to kill Mr Swann on August 20th, 2020 “intending that he would fear it would be carried out.”

Mr Hawkes, from Ardmillan Crescent in Ards, Co Down was also charged with pursuing a course of conduct which amounted to harassment of Mr Swann and with the improper use of a telecommunication network in that he allegedly sent a “message or other matter that was of a menacing nature” on the same date.

None of the facts surrounding the allegations were opened in court but it is understood they relate to a number of online messages and comments about Mr Swann.

Giving evidence to the court, a police officer said she believed she could connect Mr Hawkes to each of the offences while the defendant himself did not appear at court.

A prosecuting lawyer told the court “the full file is outstanding” so he was seeking an adjournment of up to eight weeks and defence counsel Kelly Doherty said she had no objection to that.