Plans for ‘substantial’ prison on Thornton Hall site back on agenda 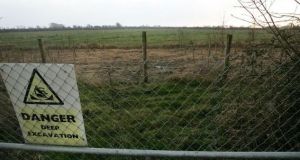 Plans for a large prison on the Thornton Hall site are again under consideration as part of a €175 million upgrade of the country’s prison facilities.

The upgrade and extension plans are part of the Irish Prison Service’s (IPS) goal to end the practice of “slopping out” in the near future. The service is also expecting further increases in the prison population over the next five years.

The 67-hectare Thornton Hall site near Swords in north Dublin was once the planned location of a “super-prison” capable of holding 2,200 prisoners. However, it has remained vacant since an agreement with a private developer collapsed 12 years ago.

More than €50 million was spent on the site but no significant construction work on the proposed prison took place.

Since then it has been under the control of the Department of Justice. In 2019, the department offered some of the site to the Land Development Agency to build homes to ease the housing crisis.

Now, according to tendering documents, the site is again under consideration for a prison complex.

Last week IPS sought to establish framework agreements for major construction projects across the prison estate which may begin over the next four years.

The maximum estimated value of the construction projects is €175 million “but this may change in light of economic circumstances”, the tendering documents state.

The framework “may or may not” include the “development of [a] substantial new prison and ancillary services in Thornton Hall”.

The IPS is seeking to modernise its 14 prisons and “at a minimum” eliminate prisoner accommodation which does not contain in-cell sanitation.

“This will be achieved by the provision of new custom designed prison accommodation or the upgrading of existing facilities and/or a combination of both,” the document states.

A small percentage of prisoners still have to “slop out” due to lack of facilities.

An IPS spokesman said the purpose of the framework agreement is to gather a list of construction companies capable of carrying out major construction projects. This will save time if and when projects are greenlit.

He said there are currently no active plans for a prison at Thornton Hall or anywhere else but that the site would be an obvious choice for a location if a decision is made to build a new facility.

Any new prison there will likely be significantly smaller than the “super-prison” originally planned for the site. The current Department of Justice policy is to focus on smaller facilities in light of research showing these are more conducive to the rehabilitation of prisoners.

As part of the evaluation process, construction companies seeking to bid for the upcoming contracts will have to submit sample plans for a 92-cell block extension to an existing, undisclosed prison.

The country’s prison population has increased significantly in recent years. New committals have plateaued with the coronavirus pandemic but are expected to increase again when society opens back up.

Prison authorities have attempted to combat overcrowding by adding new beds – 188 beds have been added since 2016 – and increasing the use of temporary release by 34 per cent.

This has had only a limited impact; figures showed most prisons were near or over capacity throughout much of 2019.

A recent IPS report prepared for Minister for Justice Helen McEntee also warned the increase in the Irish population is projected to lead to further increases in prison numbers.

An increase in the national population to 5.3 million by 2026 will mean another 333 people in custody, it said.