Michael Keogh funeral: ‘Daddy, you will forever be my superhero’ 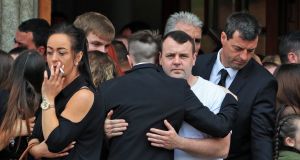 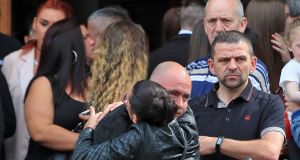 Members of family and friends of the late Michael Keogh console each other after his funeral Mass this morning at St Francis Xavier Church, Gardiner Street, Dublin. Photograph: Colin Keegan/Collins Dublin 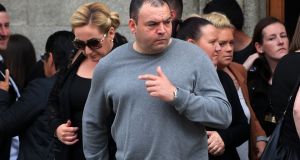 Michael Keogh sat slumped in his wheelchair in front of the altar at St Francis Xavier Church on Dublin’s Gardiner Street.

Facing him, perched on top of the coffin, was a photograph of his son, also named Michael. Inside the coffin was Michael’s bullet-ridden body, a life snuffed out in an underground car park near Sheridan Court flats complex on Dorset Street on Wednesday, May 31st – the latest casualty of the Kinahan-Hutch gangland feud.

The photograph and the father stared at each other, but if Michael snr felt emotion at the occasion (and how could he not?), he did not show it outwardly. An air of stoic resignation attended the man as family members ministered to his needs, making sure he was comfortable at his son’s funeral.

Six men carried Keogh’s coffin up the central aisle of the huge 19th century church whose ornate interior has a monumental feel to it, making the mourners appear few in number. There were perhaps 150, of whom 50 were family and close friends and occupied the first few pews closest to the altar.

As the coffin was laid in place, a large spray of white lilies, red roses and greenery fought for position with the photograph and a large black motorcycle helmet.

Were there other gifts, asked Fr Dermot Mansfield? The family looked around at each other; someone in the front row gestured to others to go up.

Ah, yes, there were, indicated Fr Mansfield, as forward came a small plastic model of a motorcycle, a yellow high-viz vest and a blue hard hat of the sort worn on building sites.

“That’s lovely. That’s great,” he said as the vest and hard hat were laid on the steps of the altar. “Thanks for putting them there.”

This was a difficult time for you, said the priest addressing the family. He hoped prayer would give them strength and peace in their hearts. Michael had been “taken too soon from you”, he said, but he had gone into the arms of God and into the arms of his late mother, Patricia.

A family member cradled an urn of ashes she had carried into the church behind the coffin.

Michael Keogh was shot dead not, apparently, because of any direct involvement in the Kinahan-Hutch feud but because others close to him allegedly had such involvement. They have been linked by gardaí to the May 2016 murder of Gareth Hutch, nephew of Gerry “The Monk” Hutch, leading light of the gang that carries his name.

Keogh was allegedly connected to the so-called New Irish National Liberation Army, an outfit aligned with the Kinahan cartel.

This flimsy association was sufficient, apparently, to attract the attention of the Hutch gang, and elevates Keogh as the first feud victim on the Kinahan side of the divide since the February 2016 murder of Kinahan associate David Byrne in the Regency Hotel.

When it came to the readings, Fr Mansfield looked to the family.

Occupants of the first pew turned around. Others looked at each other, seeming to say “Is it you or me?”

Eventually a fair-haired woman in a white coat was persuaded to volunteer, as was a young man in a black T-shirt, jeans and sneakers.

“Come on up,” said the priest to the pair, adding to the congregation, “just give us one moment now.”

Fr Mansfield opened the Bible at Revelations 21.4 and the woman spoke.

From the organ balcony came the sweet sound of mandolin and guitar and two women, sounding not unlike Kate and Anna McGarrigle, singing My God Loves Me.

For his homily, Fr Mansfield said he did not have words to say. Michael had been taken from his family, he said, when he was “turning his life around, trying to go forward in life”.

“We’re all in that boat,” said the priest, “always trying to get our lives around and go forward.”

He urged people to “be good to one and other, and forgiving” and accept that in life, “not everything goes right for everyone”. He urged everyone to live their lives as best they could “with truth and goodness”; there should be no revenge; people should break the cycle.

After Holy Communion, Fr Mansfield indicated that Karl and James had a few words to say.

As family members looked around and eulogists were not stepping forward, the priest waited in anticipation. “Great if you could do it,” he said encouraging two young men as a sheet of paper was passed back and forth between the pews.

Eventually, a young man in a black suit and polished shoes stepped forward.

There was never a right time to say goodbye, he said, reading from the sheet of paper.

“I miss you Daddy,” he continued. “I hope you can hear me inside, to let you know Daddy you were, and will forever be, my superhero. So please Da, go do your best and know to me you were always best and I love you so much and miss you every day. Love always, Jamie.”

There was a sharp intake of air, a gulp of sorrow from a woman that filled the air as the congregation began applauding.

Another youth, more a child than a young man, then stood behind the lectern and spoke two, perhaps, three sentences. Through tears and phases made incoherent by grief, the only words the boy spoke that were distinct were those of thanks to the deceased.

“You taught me right from wrong,” he said.

The mourners emerged from the church, blinking into sunlight on Gardiner Street, as the strains of Christy Moore’s version of the Scottish ballad Black Is The Colour faded from their hearing behind them.

A Garda helicopter hovered overhead. Members of the Armed Support Unit sat in their BMW, rear windows blacked out, at the corner of Mountjoy Square. Uniform colleagues ushered all traffic away from the area.

The family stepped into three funeral stretch limos. Michael snr was lifted from his wheelchair into the front passenger seat of one of them, still showing no emotion.