‘We just want justice for those boys because the injuries are for life; they will be scarred for life’ 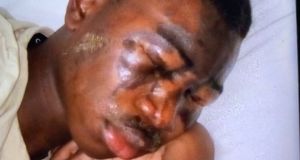 The Minister for Justice has advised parents of three teenagers targeted in an acid attack to seek reasons from the Director of Public Prosecutions (DPP) as to why two alleged perpetrators are not facing criminal charges.

Charlie Flanagan’s statement that he could not interfere in the criminal justice process came after calls from parents for review of the decision. All three of the victims suffered severe skin burns in Waterford last April in what their families say was a premeditated attack.

This week gardaí informed them of a DPP decision that two of the alleged perpetrators would not be charged but would instead receive juvenile cautions.

The parents of the victims say four perpetrators were involved in the incident which occurred in the Earlscourt housing estate.

Tega Agberhiere (17), a youth player for Waterford FC, suffered severe injuries to his face and body and his eyesight was damaged when an unspecified substance was thrown on him. Oisín Daly (19) and Pádraig Sullivan were also injured.

The families say they were told by gardaí that the decision to caution the two people was based on their being underage and not having come to Garda attention prior to the attack.

Despite this, the families appear to be stepping up their demands for a review of the decision and have called on Taoiseach Leo Varadkar and Mr Flanagan to become involved.

“We just want justice for those boys because the injuries are for life; they will be scarred for life,” said Tega’s mother, Christie Agberhiere. “You pour acid on somebody’s face, the back and the legs and you expect those people to walk freely in the streets of Waterford?”

Ms Agberhiere, Oisín’s father Martin Killinea and Pádraig’s mother Shirley Sullivan were speaking on RTÉ’s Liveline programme on Thursday, where they said they wanted a review of the decision but have not been given any guidance on how to get one.

Mr Killinea told The Irish Times he wanted clarity on the case from Mr Flanagan.

He referenced comments made by Mr Flanagan and the Mr Varadkar following the incident. Mr Varadkar had said that the people responsible for the attack would “face the full rigours of the law”.

“For a child to go out one evening and then to come home with third-degree acid burns; what’s to stop that from happening again? There has to be a deterrent,” he said.

Pádraig Sullivan’s mother Shirley said the outcome threatened to send out the wrong signals to other potential attackers. “I want answers,” she said.

Mr Flanagan said “the Director of Public Prosecutions is independent in making a decision as to whether or not to prosecute a case” .

“As Minister, I simply cannot politically interfere in these criminal justice processes. However I do hope the families are liaising with the gardaí and examining other avenues. For example they are entitled to engage with the DPP to seek the reasons why a prosecution did not take place at this time.”

Election 2020: Voters must register by close of business on Wednesday 10:47
Man (23) doused in petrol and set on fire in Cork attack 10:38
Election 2020: Fine Gael and Fianna Fáil set to reveal spending plans worth billions 09:37
Man (30) attacked with hammer and baseball bat in Cork city 06:41
Over 200 gardaí begin cybercrime training to speed up online child abuse investigations 02:45