Not black and white: The legalities of a pint of plain during lockdown 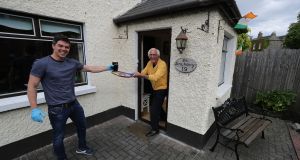 A delivery service operating out of Bath Pub on Shelbourne Road, Dublin, on May 7th. Photograph: Nick Bradshaw

Many businesses have had to adapt to a “new normal” since the start of the pandemic, not least pubs sitting on thousands of euro worth of stock with no one to serve it to.

Pubs are likely to be among the last businesses to reopen; the Government has said they will not be permitted to trade before August 10th. Some publicans are seeking an early opening date on the grounds that their premises also operate as restaurants, while others have come up with innovative ways of getting pints to customers.

These come in three varieties. Some pubs allow you to order a pint over the phone and then collect it at the door of the premises. Others will deliver it from the bar to your front door after you phone in an order. And a few have even operated mobile pubs – installing taps in the back of a vehicle and driving it around the neighbourhood like an ice-cream van.

These innovations have been mostly welcomed by regular customers, but they have also caused confusion among vintners and even An Garda Síochána.

Irish licensing laws are confusing at the best of times. In addition to the Covid-19 emergency legislation, there are five different Acts governing the sale of alcohol, including one dating from 1872.

As a result Garda management around the country has chosen to interpret the legislation in different ways. For example, in Westmeath recently gardaí ordered a number of pubs to cease their dial-a-pint services. In a Facebook post two weeks ago Westmeath Garda said it had received reports “from concerned citizens” about the practice.

However, sources say that the Garda later received legal advice that this interpretation of the law was incorrect and that Garda management subsequently apologised to publicans. The Facebook post has since been deleted.

Last weekend Donegal gardaí put a stop to the “Guinness Express” operated by O’Flaherty’s Bar in Buncrana. It is unknown what offence is alleged, but 20 pints were seized and a file is being prepared for the Director of Public Prosecutions. On Monday the bar claimed the pints had been returned.

Elsewhere, pubs are operating delivery services with seeming impunity. Within a kilometre of this reporter’s living room in north Dublin, at least two pubs will deliver a pint to the front door.

So what exactly does the law say? Unfortunately, unlike a pint of plain, it’s not quite black and white.

It is “perfectly legal” for a pub to sell pints for consumption off the premises, says Dorothy Collins, a barrister who specialises in licensing law. Most pubs have a seven-day licence, meaning they can sell drink to take away, just like an off-licence.

But there are caveats, including that the alcohol cannot be consumed within 100m of the premises. “So that rules out people buying their pints and sitting in the car park to drink them,” says Collins.

Delivering drink to customers’ doors is slightly more fraught, legally speaking. Publicans can deliver pints but the order must be phoned in to the pub itself first, she says, and payment must also be taken over the phone beforehand instead of at the customers’ front door.

“I have advised people to take the credit card details over phone and print out a receipt, which they can then show to the guards if they are stopped while delivering.”

What about pulling pints in the back of a van outside the customers’ homes? This may make for a nicer pint but there are several legal issues. For example, if vans are outfitted with gas canisters they need to fulfil certain health and safety conditions such as displaying warning labels, says Collins. There may also be insurance implications.

One more thing: pints can technically be served in an open container but the same is not true for spirits; you need to put a lid on your gin and tonic.

“So long as publicans refrain from ‘hawking’ alcohol door-to-door, their seven-day pub licence does allow for the sale of alcohol outside or ‘off’ the premises. This includes phone orders for delivery,” a spokesman for the Vintners Federation of Ireland said on Monday.

Some gardaí have raised concerns that pub deliveries could be encouraging people to have parties. “If that’s the case they should close down the Tesco off-licence too,” says one frustrated industry source.

Collins says if publicans are seen to be encouraging social gatherings, it might have implications when the time comes to renew their licences.

It is important publicans obey not only the letter of the law but “the spirit of the law”, she says. This includes using personal protective equipment and practising social distancing.

“Unless they’re doing it responsibly, they’re spoiling it for everyone.”