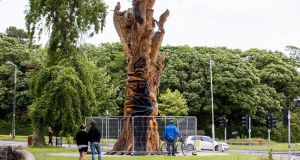 Local representatives and Dublin’s lord mayor have condemned “an attack” on the Tree of Life sculpture beside St Anne’s Park in Raheny, which is believed to have taken place in the early hours of Monday morning.

Gardaí say they are carrying out enquiries after the sculpture was set alight.

The structure, which was designed from a dying Monterey cypress tree by sculptor Tommy Cragg over three years and completed in 2018, sits at the northeast corner of St Anne’s park, where Clontarf Road and Watermill Road meet.

The 10 metre tall sculpture features carvings of woodland animals and birds and was inspired by wildlife from St Anne’s and the nearby Bull Island.

Dublin fire brigade tweeted on Monday afternoon that the fire had caused damaged to the artwork, while a Garda spokesman said they were aware of a incident of criminal damage at St Anne’s Park in the early hours of June 22nd.

Lord Mayor of Dublin Tom Brabazon said an “accelerant” had been used in the “attack” on the sculpture and condemned “this wanton act of vandalism in the strongest possible terms”.

“It’s so sad to see something like this happen”, said the Lord Mayor. “I would appeal to anyone with any information to contact the Gardaí.”

Green party councillor Donna Cooney said the sculpture was a “joy to behold” and “so well loved” by the local community, particularly children.

She said the damage to the tree must have been “deliberate” and that the burning could not have happened by accident.

“It was fine yesterday, it must have been last night,” she told RTÉ’s Liveline show. “I got a shock to see it this morning.”

Ms Cooney was hopeful CCTV footage of the surrounding area would help track down those responsible for the vandalism, adding that more CCTV was needed in the area to stop illegal dumping at the causeway.

Irish sculptor John Hayes, who said he had visited the tree while Mr Cragg was carving the swan on top, told Liveline he believed the damage to the base of the structure could probably be repaired.

“It takes a long time to do that kind of thing and a very short time to destroy it,” said Mr Hayes.

He added that he’d love to ask the person responsible for the damage “why?”.

“I’d like to say come and work with me on a sculpture and you’ll see the amount of time that goes into it.”

Fianna Fáil councillor for Donaghmede Daryl Barron tweeted that he was “horrified and shocked” by the damage and that he had “no words to describe what type of person would do this”.

Fianna Fáil TD Sean Haughey also expressed shock at the “mindless vandalism” of the sculpture and called on anyone with information to contact gardaí.