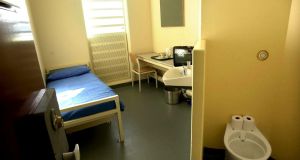 Alan Ellis, who has been in almost continuous solitary confinement for the last four years, is to be the first occupant of a new specialist unit for the State’s most violent inmates.

Ellis’s lawyers say he suffers from paranoid schizophrenia and Tourette’s syndrome. He has a long history of violence. He was imprisoned in 2012 for false imprisonment.

He appeared in Dublin Circuit Criminal Court on Friday accompanied by four officers in full riot gear to face sentence for attempting to slash a prison officer two years ago.

Ellis (26) of Rathmines Road Lower, Rathmines Dublin, pleaded guilty at Dublin Circuit Criminal Court to threatening to kill a prison officer and producing a blade in the course of a dispute at Mountjoy Prison on June 28th, 2016. He will be sentenced next Thursday.

A psychiatric report handed into court stated Ellis’s mental state has deteriorated significantly due to his solitary confinement which involves spending 23 hours a day in his cell.

In his statement to gardaí he admitted the assault on the prison officer and said he intended to slash his wrist.

After his sentence next week, Ellis will be moved from Cloverhill to the new National Violence Reduction Unit in the Midlands Prison in Portlaoise.

Built at a cost of €2.7 million, it will accommodate up to 10 of the most violent prisoners in the Irish prison system. The unit combines maximum security conditions with a strong emphasis on therapeutic treatment of offenders.

Its specially selected officers will wear body cameras at all times and will be the only staff members in the Prison Service permitted to carry batons on duty.

Staff have been trained to spot the triggers and warning signs of each prisoners’ violence so they can intervene before any attack or outburst occurs.

Ellis is expected to be joined in the unit by Leon Wright, a young man with 34 convictions for assault who is serving a 13-year term.

Mr Ó Braonáin said Ellis was diagnosed with Tourette’s syndrome when he was seven years old and was expelled from three different schools for fighting other children who teased him about his condition.

He has 35 previous convictions, including three assaults and four burglaries. In 2012 he was jailed for six years after kidnapping a 14-year-old boy. Det Garda Barry Brennan told Antonia Boyle BL, prosecuting, that on June 28th, 2016 Ellis asked for some toilet paper to be brought to his cell.

When prison officer Kevin Fagan handed a roll through the hatch, Ellis grabbed his arm and slashed at it with a blade moulded to a toothbrush handle. The blade cut the officer’s fleece, leaving him uninjured but shaken.

When Mr Fagan asked him why he had attacked him, Ellis said “F**k you, I’ll chop you up”.

Ellis made a statement about the incident in which he said he had decided to “get” Mr Fagan due to the officer disrespecting him. He said he felt guilty afterwards and knew he had done wrong.

In a victim impact statement, Mr Fagan said that he does not understand to this day what led Ellis to attempt to hurt him.