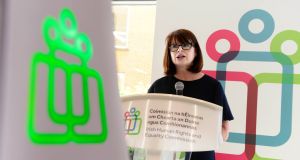 Irish Human Rights and Equality Commission chief commissioner Emily Logan said “rights must not only be recognised, but must also be vindicated through the State’s services and our laws”. Photograph: Cyril Byrne

Thirteen court cases involving the right of refugees to family reunification have been notified to the Irish Human Rights and Equality Commission (IHREC) since the start of this year, the agency has said.

Publishing its annual report for 2017, the commission said a key area of concern was the issue of eligibility for family reunification, and the ongoing threats facing migrant children. It urged the Government to re-examine its policies on family reunification .

The current definition of a refugee family member eligible to come to Ireland under the reunification programme is confined to a husband or wife or children under 18. Calls have been made to broaden the entitlement to grandparents, siblings and other family members of refugees.

Chief commissioner Emily Logan said the IHREC was aware of a significant increase in the number of people taking cases relating to international protection issues through the courts.

“Since the start of this year, the commission has been notified of 13 such cases relating to family reunification alone,” she said.

Ms Logan said the introduction of the international humanitarian protection scheme earlier this year, which provides some family reunification rights for applicants for international protection from 10 designated countries, was a welcome development.

“However, many others continue to be left on the wrong side of that dividing line,” she said.

“The recent events on the southern border of the United States, where the separation of children from their parents was met with widespread revulsion, gives some insight into how we feel, as human beings, about the bond of family.

“As a commission, we would urge the Government to look again at its policies on family reunification, in the recognition that those bonds are not severed by national borders.”

The third annual report of the commission, published on Monday, shows there were 1,890 complaints made to the body by members of the public – a 6 per cent rise on the previous year.

The top three concerns in relation to the Employment Equality Acts were related to discrimination in employment on grounds of disability (31 per cent), race (19 per cent) and gender (18 per cent).

She highlighted the issue of housing, and what she said was the increased level and types of discrimination being experienced by certain groups living in Ireland.

“Progress has been made on human rights and equality issues, including State recognition of Traveller ethnicity; in healthcare, following the referendum to repeal the Eighth amendment; and Ireland’s ratification of the UN Convention on the Rights of Persons with Disabilities,” Ms Logan said.

“However, rights must not only be recognised, but must also be vindicated through the State’s services and our laws.”

Ms Logan said the commission would continue to examine what practical actions were being taken to vindicate people’s human rights and equality of treatment, in particular regarding the forthcoming legislation governing a framework for abortion services, and legislation giving effect to the Convention on the Rights of Persons with Disabilities.

The commission was given permission to appear as amicus curiae (friend of the court) in seven significant cases last year including the landmark Supreme Court case on the constitutional right of people in direct provision to seek employment.

The commission is an independent public body appointed by the President and directly accountable to the Oireachtas.

It has a statutory remit set out under the Irish Human Rights and Equality Commission Act (2014) to protect and promote human rights and equality in Ireland, and build a culture of respect for human rights, equality and intercultural understanding in the State.