Case was settled with no admission of liability, muddying the picture for others 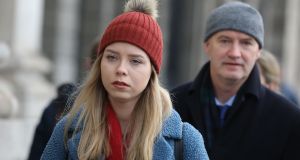 The outcome of the case taken by 26-year-old Aoife Bennett will be a disappointment for the more than 100 people who also believe they developed the lifelong condition of narcolepsy as a result of being administered the Pandemrix vaccine.

The proceedings taken by Bennett – which were to act as a test case – were broken into two parts.

Because the case has now been settled with no admission of liability, it is clear that the objective of proving the issue of liability has not been achieved.

For the State, which could have been facing a bill of €100 million – and possibly substantially more had it lost the case – that outcome is a victory. (The State had indemnified GlaxoSmithKline.)

What is less clear is what will happen now with the 100 or so people who have developed a debilitating lifelong condition and believe it is as a result of a State-administered vaccination programme.

Many countries run no-fault vaccination damage compensation schemes to deal with such scenarios. An Oireachtas committee first recommended such a scheme be put in place here as far back as 2001.

In 2007 a steering group that reviewed the schemes that exist in other countries recommended a three-tiered compensation structure depending on the severity of damage: minor damage (€15,000); moderate damage €75,000; and severe damage (€200,000).

More recently the Health Research Board produced a report for the Department of Health that noted the Pandemrix claims and said the absence of a vaccine damage compensation scheme would result in the exposure of the State to a large number of court cases.

It is because Ireland has no compensation scheme that the matter was litigated here, something that has not happened in most other European countries.

It is now considered most unlikely, because of the costs involved and the risk of losing, that another sufferer would try to succeed where Bennett has not.

It is not known what payment was agreed with Bennett, but it would seem likely that it is in the range envisaged by the proposed no-fault compensation scheme that is in the programme for government.

Aoife Bennett’s condition is in the more serious end of narcolepsy suffering, the trial heard, and so her payment may reflect the figures suggested by the 2007 review group, with account taken for inflation.

In September Minister for Health Simon Harris told independent TD Denis Naughten about progress on the introduction of a no-fault compensation scheme for people with disabilities they claimed arose from vaccination.

The policy objectives of doing this included fairness, the reduction of the costs of litigation and the maintenance of public confidence in immunisation, the Minister said.

A second report on the issue is due shortly from Mr Justice Charles Meenan. Perhaps the department, and the Government, will then move to establish a scheme that could be used by those who were so closely watching the case taken by Aoife Bennett.