Man charged with murder of pensioner in Galway 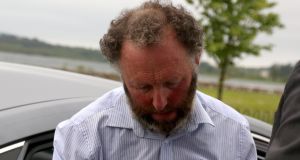 Michael Scott from Portumna, Co Galway has been charged with the murder of Chrissie Treacy. Photograph: Hany Marzouk

A 54-year-old man has been remanded in custody charged with the murder of a Co Galway pensioner.

Michael Scott from Gortanumera in Portumna has been charged with the murder of Chrissie Treacy, from Portumna, on April 27th last year.

The 75-year old, who lived alone at Boula in Portumna, was found dead at her farm over a year ago.

Scott appeared before a special sitting of Loughrea District Court on Thursday evening.

Detective Sergeant Paul Duane gave evidence of arresting Scott. He told Judge Gerard Furlong that in reply to the charge Scott said: “I did not murder Chrissie Treacy. A genuine accident.”

Scott, who was dressed in a striped shirt with rolled up sleeves, did not speak during the brief hearing which lasted less than four minutes.

The judge remanded Scott in custody to appear before Loughrea District Court on June 5th.