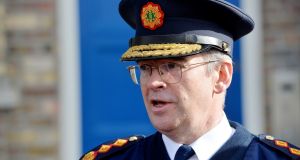 The policing of house parties and large-scale street gatherings had been “difficult” for the Garda during the Covid-19 pandemic, but it was that doubtful giving the force more powers to deal with them would be a good idea for the Republic, Garda Commissioner Drew Harris has said.

“I have my doubts as to whether more policing powers in a health emergency is the correct route for us to go as a country,” he said.

Speaking at a public meeting of the Policing Authority on Wednesday, Mr Harris said that breaking up parties and gatherings was not “catered for” by the Covid-19 regulations formulated by Government.

Separately, he described some “far right” groups now protesting more often in the Republic as posing a national security challenge and he was keeping Minister for Justice Helen McEntee informed.

The growth of the far right was “a European phenomenon” and the Republic was not “entirely isolated” from that wider trend. Mr Harris added the Garda was aware media focus on the far right was also increasing in Ireland.

“We do regard that, properly, as being an issue concerning national security and therefore we keep the Minister informed of our particular concerns we have in respect of that,” he said.

There was, he said, no “simple answer” to the problem of house parties which were taking place despite the Covid-19 pandemic and partly because of a lack of “other places of entertainment to attend”.

When gardaí arrived at such gatherings their very arrival “dampened” the “ambience”.

“But people do have constitutional rights in terms of protection of the home place and we do have to respect that but at the same time to be in a position to respond to serious criminality should we see that,” Mr Harris said.

At the meeting he was asked repeatedly about a recent party involving large numbers of people at Oliver Bond flats in Dublin’s south inner city, the hundreds of people gathered on the streets in Galway city drinking on Monday night and house parties in Cork as part of freshers’ week at University College Cork.

“It has been difficult,” Mr Harris said of policing house parties and street drinking during the Covid-19 pandemic, which gardaí aimed to bring to an end by arriving on the scene and using “persuasion”.

“To start moving further in terms of entering a home to break up a party, that’s a serious escalation in terms of our enforcement powers. It’s a road that we should be very careful of before we step down on,” he said.

“At some point we will come out of this crisis as it is. And I’m always remembering we have civil liberties that we enjoy, that we wish to protect going forward and also, for our part in An Garda Síochána, that we have protected our relationship with the public as well.”

Deputy Commissioner John Twomey said some of the media reports about recent street gatherings were not accurate. He explained that during early engagements by gardaí with people gathered at the event at Oliver Bond flats two weeks ago, gardaí had encouraged people to behave appropriately and initially there was compliance.

“It was only at a subsequent point, at a time later in the evening, when the numbers had grown and people were actually expressing vomit that some of the behaviour became unacceptable ... it became more evident, and we dealt with it at that particular time.”

The issue of the Garda’s record on investigating sex crimes was also discussed at the meeting, with authority member Judith Gillespie saying detection rates for rape and sexual assault reported was as low as four per cent.

However, the Garda’s chief information officer Andrew O’Sullivan said that the figure related only to sex crimes reported so far this year. It was “artificially low” as it would take more time for the crimes reported in 2020 to reach an investigative conclusion. Ms Gillespie said she accepted “excellent” progress was being made by the Garda in relation to how it investigated such crimes.