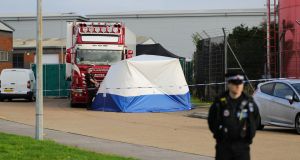 Police activity on October 23rd at the Waterglade Industrial Park in Grays, Essex, England, where the bodies of 39 Vietnamese people were found in a refrigerated container. Photograph: Aaron Chown/PA Wire

Two men have been held on suspicion of manslaughter in connection with the deaths of 39 Vietnamese people found in a refrigerated container in Essex, England.

Essex Police said a 22-year-old man was arrested in Northern Ireland on Sunday on suspicion of manslaughter and facilitating unlawful immigration.

He remains in police custody in Essex, officers said.

The force also said on Tuesday that a 43-year-old man, Gheorghe Nica, had been charged with 39 counts of manslaughter and one count of conspiracy to assist unlawful immigration.

Mr Nica, of Mimosa Close in Langdon Hills, Basildon, was detained at Frankfurt Airport in Germany and brought back to the UK on a European Arrest Warrant.

The 43-year-old appeared at Chelmsford Magistrates’ Court on Saturday and will next appear at the Old Bailey on March 16th.

Officers added that postmortem examinations had been completed and the provisional cause of death for all those who died was a combination of lack of oxygen and overheating in an enclosed space.

In October, emergency services were called to an industrial estate in Grays, Essex, shortly after a lorry arrived on a ferry from Zeebrugge in Belgium.

Ten teenagers, including two 15-year-old boys, were among 39 Vietnamese nationals whose bodies were discovered in the lorry’s trailer in the early hours of October 23rd. – PA