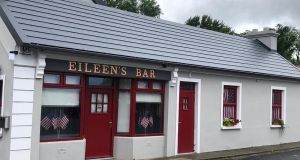 Gardaí said they spoke to the licensee and enforcement action was only taken when ‘our officers failed to get compliance’. Photograph: via Facebook

A Mayo publican was arrested last night after he opened his ‘wet’ pub and allegedly admitted patrons after they tested negative in a rapid Covid-19 test.

Publican Donal Byrne, who operates Eileen’s Bar in Aughamore, near Ballyhaunis, was arrested last night after he refused a request from gardaí to comply with Covid-19 regulations under the 1947 Health Act.

Food is not served in Eileen’s Bar and therefore it does not qualify as a gastro-pub. Under the current Level 3 national restrictions wet pubs can only open for takeaway or delivery.

Mr Byrne, a well-known local entrepreneur in his thirties, was briefly questioned at Castlebar Garda station before being released. A file is being prepared for the Director of Public prosecutions.

Garda Supt Gabriel Moran told The Irish Times on Friday that gardaí had arrived at the pub at 7.05pm on Thursday and spoke to the licensee and others.

The superintendent said the licensee was “encouraged to comply with the Covid regulations”.

Supt Moran added: “The matter only went to enforcement when our officers failed to get compliance”.

Mr Byrne, whose decision to provide rapid Covid testing to customers has attracted widespread publicity, could not be contacted on Friday for comment. It is unclear if he intends to keep the pub open.

In previous interviews, Mr Byrne said his rapid testing regime, using kits from Communicare Medical Supplies in Claremorris and conducted outside the pub, guaranteed the safety for his customers.

He said previously that this testing, carried out by a qualified team of technicians, would be mandatory and only customers who passed the test would be allowed enter the pub.

Mr Byrne had said medical professionals were set to be outside the pub between 5pm and 7pm every evening to test prospective customers.

He said customers with a negative test result would be allowed enter and while on the premises they would adhere to Covid-19 measures, such as mask-wearing.

Gardaí say they will monitor the premises for compliance. Should the pub reopen gardaí could decide to seek an emergency closure order.

Mr Byrne manages the Big Red Barn company, based in Swinford, which designs and manufactures event structures as well as timber homes. He has also organised various music events.