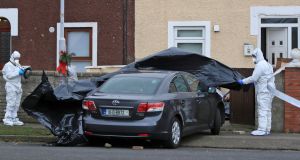 Gardai pictured on Monday morning at the scene of the shooting of Kenneth Finn at Moatview Gardens, Coolock, Dublin. Photograph: Colin Keegan/Collins Dublin.

A man who was shot outside a house in Coolock, north Dublin, on Sunday evening has died in hospital.

Kenneth Finn, a 36-year-old father of at least two young children, was shot in the head and suffered catastrophic injuries.

Gardaí believe the victim was sitting in his car outside a house at Moatview Gardens he was about to call to when the gunman fired at him at point blank range.

Gardaí said he was pronounced dead on Tuesday afternoon in Beaumount Hospital.

A postmortem examination will be carried out by the State Pathologist, Professor Marie Cassidy, on Wednesday.

Mr Finn lived at the Clare Village Apartments, about a kilometre from the scene of the shooting.

Gardaí suspect the gunman may have been on foot and may have known the target would be in the area at the time.

They believe Mr Finn had links to major criminal figures in north Dublin and those associations are being investigated in an effort to establish a motive for the attack.

While the investigation is still in its early stages, gardaí do not believe it is linked to the Kinahan-Hutch feud.