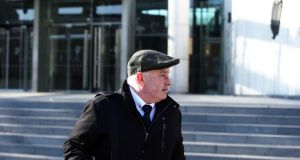 Mary Lowry visited a psychic to see if it would help when her boyfriend Bobby “Mr Moonlight” Ryan disappeared, the Central Criminal Court has heard.

The court also heard murder accused Patrick Quirke called his former lover Ms Lowry a “right bitch” and warned her brother he would personally remove her from church if she attended a Mass for his son, who had died tragically.

There was also evidence from Acting State Pathologist Dr Michael Curtis the most likely cause of the injuries that killed Ryan was impact with a vehicle but that the pathology evidence was “sub-optimal”.

Mr Quirke has pleaded not guilty to the murder of part-time DJ Bobby Ryan, known as Mr Moonlight.

Ryan went missing on June 3rd, 2011 after leaving his girlfriend Mary Lowry’s home at about 6.30am. His body was found in an underground run-off tank on the farm owned by Ms Lowry and leased by the accused at Fawnagown, Tipperary 22 months later in April 2013. The prosecution claims Mr Quirke murdered Mr Ryan so he could rekindle an affair with Ms Lowry (52).

Mr Quigley told prosecution counsel Michael Bowman SC that following Bobby Ryan’s disappearance Mary visited a psychic in Nenagh to “see if that could help in any way.” He also recalled building an extra bedroom on to Mary’s home for her eldest son Tommy, who had been sleeping in a room in his grandmother’s granny flat attached to the house.

In August 2012 the Quirke family suffered the tragic loss of one of Mr Quirke’s sons. Some days after the funeral Mr Quigley was working on the roof of Mary’s house and overheard loud shouting between Mr Quirke and his sister.

A week or two after that Mr Quigley was again at Mary’s house when Mr Quirke approached. The witness told Mr Bowman: “He said my sister was a right bitch and didn’t support him or Imelda.” Mr Quigley said he responded: “Do you not think Mary has enough to deal with.”

Mr Quirke then told him he only wanted friends and family at his son’s month’s mind Mass and would “personally remove her from the church”. Mr Quigley told him that it was up to Mr Quirke and his wife Imelda who attends the mass.

He also remembered a family wedding in Spain which Mary was due to attend but she could not find her passport when it came time to go. Mr Quigley said he helped to search for the passport but they did not find it and Mary was a couple of days late arriving in Spain.

In December 2012 Mary showed her brother CCTV footage of Patrick Quirke looking in her doors and windows and on another occasion Mr Quigley was there when Mr Quirke returned a key to Ms Lowry. Mr Quigley tried the key and found that it was for Mary’s front door.

Following the recovery of Bobby Ryan’s body in April 2013 Mr Quigley saw Mary and she was “visibly upset”. They had a cup of tea and waited for her boys to finish school. Mary and her children stayed with Mr Quigley in Newport, Tipperary for a week, travelling to Fawnagowan to bring her children to school. That Friday the media called to Mr Quigley’s house so Mary decided to stay at their sister’s home and she later rented a house in nearby Dundrum.

Bernard Condon SC for the defence asked Mr Quigley if he had ever seen the tank where Bobby Ryan’s body was found prior to 2013. The witness said he saw a trough around it but the tank was covered with top soil and mud and he never saw any concrete and didn’t know of the tank. Mr Condon asked him: “How could you have missed it?” He repeated that it was covered with soil and mud and he could see no concrete. Mr Condon asked him: “At no stage did you ever see concrete?” He replied: “Never.”

Mr Condon showed him photos of the area taken after the discovery of Mr Ryan’s body and asked him he had ever seen what was in the photo. He responded that there was, “no trace of a tank. I did not see it.”

Counsel took the witness through a statement he made to gardaí in 2013. Mr Quigley agreed that he told gardaí that Mary was “panicking” when she called to tell him that a body had been discovered on the farm. He also agreed that Rita Lowry, Mary’s mother-in-law, had told him around Christmas 2010 that Jack, Mary’s son, said that his mother came home late one night. The witness further agreed that he told this to Mary and advised her to keep it to herself.

Mr Quigley recalled that when Patrick Quirke told him to “talk sense into Mary” about her relationship with Bobby Ryan the witness told the accused: “You know Mary as good as I know Mary. She will do what she wants to do and me or you won’t change that.”

He further recalled twice asking his sister if she was having an affair with Patrick Quirke. She denied it and was cross. It was a “good while later” that she told him about the affair.

Mr Condon asked him about an incident with Jimmy Lowry, Mary’s brother-in-law. The court heard that Jimmy Lowry and Mr Quigley were in a car when Jimmy referenced Bobby Ryan and said, “it wouldn’t have happened if Martin Lowry was alive.” Mr Quigley agreed that he got out of the car and slammed the door as he felt Mary was being blamed.

Dr Michael Curtis was called by defence counsel Lorcan Staines SC. He told Mr Staines that in 2015 he and his colleagues, including Professor Marie Cassidy, reviewed the post mortem report carried out by Dr Khalid Jaber in 2013. Dr Curtis said that had he been the pathologist on the day Mr Ryan’s body was found he "definitely” would have attended the scene.

The trial has previously heard that Dr Jaber did not attend the scene. Dr Curtis said he would also have asked for an anthropologist to attend and would have contacted an entomologist for advice on what to do with any insects found on the body. Had Dr Curtis been there he would have looked at the surroundings and advised gardaí on how best to recover the body so as not to damage it. He also thought it would have been a good idea to video the process of removing the body from the tank.

Looking at the postmortem and photos of the body Dr Curtis said he was in “total agreement” with Dr Jaber that the cause of death was blunt force trauma to the head. He added that in his opinion the most likely mechanism for those injuries was “vehicular impact trauma, that is, a person being struck by a moving vehicle.” He added that this was his opinion and there are other possibilities, including the use of a baton or baseball bat.

He explained the presence of multiple fractures to the skull by saying that when a pedestrian is struck by a vehicle the head can strike the vehicle and then the ground or anything else in the area.

Dr Curtis also pointed out that he only became aware in recent weeks that pieces of concrete fell onto the body when gardaí used a digger to remove a concrete slab that covered most of the tank. He found out about it, he said, because Mr Staines told him. He said he regarded it as “a very important piece of information” as it raises the possibility that some of the injuries could have been caused by pieces of masonry falling on the body.

The pathologist said that all the factors he had considered left the pathology evidence in a “sub-optimal” state. Commenting on whether the body was thrown or placed in the tank Dr Curtis said the position of Mr Ryan’s arms make it hard to imagine that they could be so neatly aligned “by chance”. Under cross examination by Mr Bowman Dr Curtis agreed that the way gardaí chose to remove the body from the tank was “wholly appropriate” and he could see no alternative way to do it. He also agreed that any of the injuries to Mr Ryan’s head could have caused immediate unconsciousness.

Mr Bowman suggested that the removal of Mr Ryan’s clothes and personal effects suggested that the person responsible knew something about the limitations of forensic evidence. Dr Curtis agreed. He also agreed that any vehicle that caused those injuries to Mr Ryan would have suffered “significant damage”, most likely to the windscreen or the roof.

The trial continues on Monday in front of Justice Eileen Creedon and a jury of six men and six women.