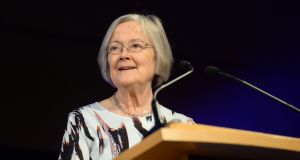 The Rt Hon the Baroness Brenda Hale of Richmond speaking at the World Congress on Family Law and Children’s Rights in Dublin. Photograph: Dara Mac Dónaill

If a child wants to give evidence in a family law case, judges should not be so reluctant to let them, Baroness Brenda Hale told an international congress on family law and children’s rights in Dublin on Monday.

The deputy president of the supreme court in Britain, said children are people and have their own personalities and wishes and could give evidence.

In the UK, in criminal cases, evidence is routinely taken from 1,000s of children every year, sometimes as young as three or four, she said.

“Lawyers are sometimes wanting to get the worst out of the witness, aren’t they?” she asked. “Some people would say that’s what lawyers are for.”

Baroness Hale was speaking at the World Congress of Family Law and Children’s Rights on the theme of ‘Are children human beings?’

The congress, in Ireland for the first time, features 150 speakers and more than 600 Irish and international delegates across four days.

Baroness Hale told delegates at the Convention Centre in Dublin, that she had two “bees in her bonnet” about the continued failure to see children as human beings.

The first was legislation and reports that referred to children as “it”, which constituted “abuse of childhood in the English-speaking world”.

The second issue was judgments referring to children as “soulless initials”, such as “T”, in the interests of anonymity. She said when she writes judgments she refers to children using imaginary names with the same initial as their own.

“I would like to campaign for all the judges in the room to adopt a similar practice,” she said, to a round of applause.

“Try and make it a plausible name, right gender, right ethnicity, but not their own, then the child really leaps out of the page in a way that they don’t if they are just an initial.”

She also said when judges are talking to children in private, for family court cases, it is a good thing if they can see children as “real human beings”.

“There was confusion about whether this was basically a public relations exercise, so that the child could meet the judge and realise the judge was a real human being,” she said.

“And the judge could explain what was going on and possibly explain to the child, ‘well you have to do as I say, just as your parents have to do as I say’. All of that is completely unobjectionable. Though you definitely need witnesses in the sense you mustn’t do it by yourself – you need someone there taking a note and ensuring you are not doing anything wrong.”

Revealing her admiration for author Ian McEwan’s book Children Act, Baroness Hale urged delegates to read the work of fiction. She said the book dealt with the dilemma facing courts and other decision makers, when a competent child refuses treatment necessary to keep him or her alive or prevent a serious deterioration in health.

“I hope you’ve read that book, whether you are a fan of Ian McEwan or not. It is a very good book, or at least quite a good illustration of what a family division judge’s life is like,” she said.