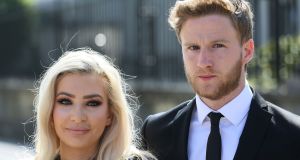 A Belfast woman has won a landmark High Court battle to secure legal recognition for her humanist wedding to an international footballer.

Laura Lacole was challenging the refusal to grant official status at the ceremony where she will marry Republic of Ireland midfielder Eunan O’Kane.

A judge ruled on Friday that her belief had been unlawfully denied equal treatment with religious couples.

Mr Justice Colton ordered the granting of temporary authorisation for a British Humanist Association (BHA) celebrant to perform a legally valid and binding wedding at a location in Northern Ireland on June 22nd.

Ms Lacole was jubilant at the verdict which could now be used by others seeking the same status. Outside court the 27-year-old said: “It’s amazing now that we are being recognised, it’s not just a privilege applied to religions.”

Under current law a couple who want a humanist ceremony must also have a separate civil registration for their marriage to be officially acknowledged.

The same situation applies in England and Wales, but not in Scotland or the Republic of Ireland.

Ms Lacole, who is also vice-chairwoman of Atheist NI, claimed she was being discriminated against under the European Convention of Human Rights’ (ECHR) protection for freedom of belief.

She issued judicial review proceedings against the General Register Office for refusing to authorise the wedding which was due to be conducted by Isobel Russo, head of ceremonies at the humanist association.

Her action was also directed at the Department of Finance’s alleged failure to introduce legislation to allow a legally binding wedding event.

Counsel for the woman argued that she and her fiance wanted the same “legal blessing” afforded under Northern Ireland law to all religious groups from Pagans to Free Presybyterians.

Without official authorisation the ceremony would be legally meaningless, he contended.

Delivering judgment, Mr Justice Colton held that the wedding was a manifestation of Ms Lacole’s beliefs. The refusal to recognise the event amounted to discrimination under European law, he confirmed.

“The State has chosen to authorise the solemnisation of religious marriage ceremonies in recognition of those bodies’ beliefs,” he said.

“Having done so, in my view it should provide equal recognition to individuals who hold humanist beliefs on the basis of my findings that humanism does meet the test of a belief body and that a wedding ceremony conducted by a humanist constitutes a manifestation of that belief.”

He decided that the legislation at the centre of the case, the Marriage (Northern Ireland) Order 2003, should be amended to read “religious or belief marriage” in the relevant sections.

Following his ruling Ms Lacole immediately phoned her fiance, at his Republic of Ireland training camp, to break the news to him. “He said he was a bag of nerves, he’s not got any finger nails left, but he can’t wait to hear more details,” she said.

“I’m just so pleased, what this means for us and to other people in Northern Ireland. It’s a landmark, I can’t believe we have done it.” Her solicitor, Ciaran Moynagh, added: “This is an important decision for Laura and Eunan, but also for all humanist couples in Northern Ireland.”

Mr Moynagh stressed that the couple were being given the same legal privilege religious groups have benefited from. “The judgment firms up that our client’s belief does engage Article 9 [freedom of belief] of the ECHR, and should be protected and respected by the State in a neutral and fair manner.”