Exhumation only allowed in the rarest of circumstances 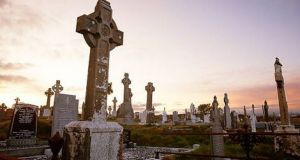 Most exhumations take place due to environmental reasons. Graveyards becoming flooded or geologically unsound are the most common reasons for moving remains. Photograph: Getty Images

The exhumation of bodies involves a complex application process, and is only allowed in the rarest of circumstances.

Most exhumations take place due to environmental reasons, according to a local authority official familiar with process. Graveyards becoming flooded or geologically unsound are the most common reasons for moving remains.

Exhumations can also take place as part of a criminal investigation. This might be because new analysis techniques, such as DNA testing, have been developed in the time since the death.

The most famous of these was the case of Rachel O’Reilly who was murdered by her husband Joe O’Reilly in 2004. Gardaí became aware the murderer had put a letter in the coffin when his wife was buried. Officers later used the letter to help convict him.

In the case of Alan Hawe, who murdered his wife Clodagh and her three sons last year before killing himself, it is understood his family applied for his exhumation.

The family would have had to apply to Cavan County Council for a licence for the process. The permission of a next of kin is required, and the family must pay a fee and cover the costs of the exhumation.

The law requires that the exhumation be carried out “with due care and decency, and in such a manner as not to endanger public health”.

An environmental protection officer from the local council must be present to supervise the process. A special coffin, lined with zinc, known as a “shell” is then used to transport the remains.

The exhumed body must then be reburied or cremated within 48 hours.