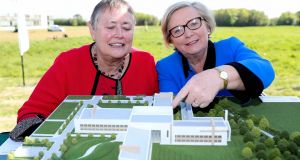 In 1979 Ireland’s forensic science lab advertised for a new director. A candidate was found but quickly backed out, telling his employers he couldn’t run an effective forensic lab in a cramped converted office block at the back of Garda HQ.

Now nearly 40 years later the 100 scientists working for Forensic Science Ireland (FSI) are to finally move out of the dingy facilities which they have for years regarded as not fit to purpose. They will move into a new state of the art 9,550 sq m facility at Backweston on the grounds of the current State Laboratory.

All going to plan the €60 million facility near Celbridge, Co Kildare will be ready in two years and provide a home for Ireland’s new DNA database, which has been credited with helping to solve almost 600 crimes, including murder and rape, since its launch a year ago.

“This building is the ideal solution to put forensic science on a sound footing in Ireland, ” FSI director Sheila Willis said.

She said the new facility will bring the FSI “in line with international norms”.

“Regulations have changed since we established the technology that we use at the moment. We’re out of step essentially with best practice.”

She continued, “You need a building designed to be in line with the current strategy and that can’t be the case in a converted office block.”

At a sod turning ceremony for the new facility on Wednesday, Minister for Justice Frances Fitzgerald thanked FSI staff for “working in conditions that have been far from ideal”.

She commended the scientists for supporting criminal investigations “often without the kind of supports you would like to have seen in place.

“You got on with the work nevertheless and did what was required over many years,” the Minister added.

Ms Fitzgerald praised the DNA database which is “playing an ever more important role” in investigations.

Dr Willis said the success of the database in the first year has far exceeded her expectations.

“My thought process was the build up would be slow in terms of taking samples from individuals,” she said.

“The take-up has been phenomenal. We now have a one in five chance of matching a unsolved crime to someone on the database. Which is amazing for the first year because that will improve as the numbers increase.”

Dr Willis said the database is also confirming that many crimes are committed by a small group of individuals.

“What we’re finding is there are multiple crimes connected to the same person. Now, in a way that’s not new, but these are hard factual findings to confirm that.”