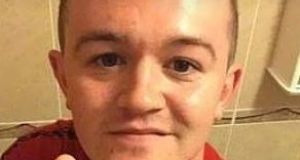 Danny McGee (21) was found lying unresponsive on the ground outside the Gaslight Bar in Queens, New York, shortly before 4am on Thursday morning.

A man has been charged in connection with the assault on a Co Longford man in New York during the early hours of Thanksgiving morning.

Twenty-one year old Drumlish native Danny McGee was found lying unresponsive on the ground outside the Gaslight Bar in Queens shortly before 4am on Thursday morning.

He was rushed to the Elmhurst Hospital Center but was later pronounced dead.

New York police began an investigation and a man is believed to have presented himself to investigators yesterday.

The New York Police Department has confirmed 25-year-old Steven O’Brien, with an address at 50-62 42 Street, Queens, New York was arrested and charged with assault. He is due to appear in court later today.

Many tributes have been paid to the late Mr McGee, who had been living and working in the US for just over a year. His hometown GAA club Fr Manning Gaels described him as a “gentleman.”

In a statement on the club’s Facebook page referred to his quiet, unassuming and genial nature. “Above all, he was a young gentleman with a great sense of humour, who was loved by all who knew him.”

These sentiments were echoed by Moyne Community School, which had been attended by Mr McGee.

“Our hearts are truly broken as we come to terms with the passing of our wonderful past pupil, Danny McGee,” a statement by the school said.