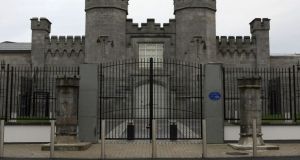 A man has been arrested in Northern Ireland under the Terrorism Act for allegedly being involved in an illegal lottery to benefit dissident republican prisoners in the Republic.

The 32-year-old was detained in the Strabane area on Saturday on suspicion of membership of a proscribed organisation by detectives from the PSNI’s Terrorism Investigation Unit.

The arrest was part of an ongoing investigation into activity linked to dissident groups the Irish Republican Movement and the New IRA.

The man was initially released without charge, before being rearrested.

He is currently being detained at Musgrave Police Station.

In a statement on the case, Det Insp Andrew Hamlin said: “The suspect has been arrested on suspicion of benefits fraud and being involved in an illegal lottery described as ‘E2 Republican Prisoners Portlaoise’.

“Police would take this opportunity to advise members of the public not to purchase these lottery tickets as they are illegal and are funding organised criminality and terrorism.”