Man arrested in connection with murder of Nicola Collins

Body-of-mother of three was found with head injuries at flat in Farranree, Co Cork in March 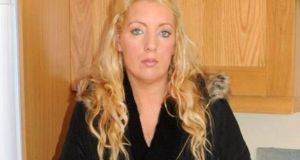 A man in his 40s has been arrested in connection with the murder of Nicola Collins (38) in Cork earlier this year.

The mother-of-three was found dead in a flat at Popham’s Road, Farranree in the early hours of March 27th, 2017.

The man is currently being questioned at Mayfield Garda Station where he is being detained under the provisions of Section 4 of the Criminal Justice Act which allows gardaí hold suspects for 24 hours.

This is the third arrest in relation to this investigation.

It is understood the arrest comes after gardaí received new information arising from results of a post-mortem examination and toxicology tests on the body of Ms Collins.

Ms Collins, originally from Tralee in Co Kerry was found with serious injuries when the emergency services were called to the flat over a convenience store at around 3.30am on March 27th.

The emergency services had been alerted by a man who was living in the flat. They attended to Ms Collins but they were unable to revive her and she was pronounced dead at the scene.

Gardaí, under Supt Mick Comyns of Mayfield Garda station, were initially treating the death of Ms Collins as suspicious pending the outcome of a post-mortem at Cork University Hospital.

But they upgraded their inquiry to a murder investigation upon receipt of post-mortem results from Assistant State Pathologist, Dr Margaret Bolster’s findings later that day.

Gardaí released Ms Collins’s name later that day after they made contact with her father, Michael who lives in Cork city and her mother, Kay who lives in the St Brendan’s Park area of Tralee.

It is understood that Ms Collins had three young children but they had not resided with her at her flat on Clashduv Road in Togher where she had lived for a number of years. She was a former pupil of the College of Commerce in Cork.