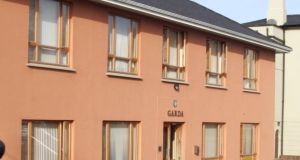 A man has been questioned at Bray Garda station (above) in relation to an incident in Kilcoole Co Wicklow over the weekend in which a girl (17) was seriously injured.

A man has been arrested following a hit-and-run in Wicklow on Saturday which left a 17-year-old girl in a critical condition.

The teenage girl was struck by a car at about 3.50am on Saturday on Main Street in Kilcoole and was taken to Beaumont Hospital in Dublin. She remained in a critical condition on Monday.

A man in his 40s was arrested on Monday in connection with the incident and detained at Bray Garda station under Section 4 of the Criminal Justice Act.

He was later released without charge and a file will be prepared for the Director of Public Prosecutions.

Gardaí are currently examining CCTV from the Kilcoole area as part of their investigation into the incident.

It is understood the teenager was walking home from a party in Greystones Sailing Club when the incident occurred.

The vehicle, which failed to remain at the scene, is described as a light coloured - possibly silver - saloon type car. It was travelling northbound through Kilcoole village toward Greystones/Eden Gate.