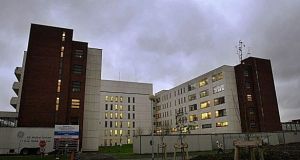 Gardaí said the man had been airlifted to Beaumont Hospital in the capital. File photograph: The Irish Times

A man has been airlifted to hospital in Dublin having sustained serious injuries during an incident in Co Longford on Thursday.

The injured man, who was in critical condition, was discovered at a wooded area in Kenagh and the emergency services were alerted.

After being attended to at the scene by paramedics he was airlifted to Beaumont Hospital, Dublin, where he was being treated on Thursday night.

In reply to queries, Garda Headquarters, Phoenix Park, Dublin, confirmed a man had sustained injuries but made no comment on the nature of the incident.

“Earlier today, Thursday 4th June 2020, a man was discovered with serious injuries at Kenagh, Co Longford,” it said. “The man was airlifted to Beaumont Hospital where he is currently in a critical condition.”