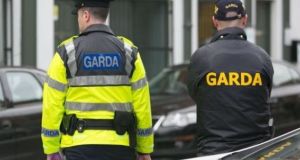 The group, made up of Romanian nationals living in Dublin, is linked to a network of bank accounts through which an estimated €1.5 million has been laundered. File photograph: The Irish Times

Gardaí have frozen €65,000 held in 14 bank accounts and seized €31,000 in cash as part of its ongoing operation into an international crime gang involved in organised prostitution, social welfare fraud and cybercrime.

Five men were arrested during searches of eight properties in north and west Dublin and four of the suspects were still being detained on Thursday afternoon.

Gardaí believe the gang was also exploiting the €350 coronavirus social welfare payment and had claimed up to €50,000 since the pandemic began via 15 people.

The group, made up of Romanian nationals living in Dublin, is linked to a network of bank accounts through which an estimated €1.5 million has been laundered.

Some of the accounts are in the names of money mules; people who have been coerced or paid to grant the gang access . Other accounts are linked to eight companies, including those in the motor trade and some 14 accounts have been uncovered linked to one person.

While the Garda raids, led by Garda National Economic Crime Bureau (GNECB), were carried out on Wednesday, four of the men were still in custody on Thursday in Ballymun, Clontarf and Store St Garda stations in Dublin.

The suspects are all in their 20s and 30s and while one man has been released, he has been charged and is scheduled to appear before the courts next month relating to his alleged obstruction of the Garda.

At least 10 mobile phones, a laptop, tablet and smart watches were also seized for analysis and the Garda investigators were also examining documents linked to the eight companies and the bank accounts under investigation.

Gardaí also seized whiskey and champagne valued at € 2,784 during the searches, which were aided by Romanian-speaking gardaí and other Garda members seconded to the Department of Employment Affairs and Social Protection.

A total of 70 bank accounts are now under investigation and gardaí believe many of them were used to receive the proceeds of cyber crimes, including targeting people in scams to secure their PIN numbers and steal money from their bank accounts.