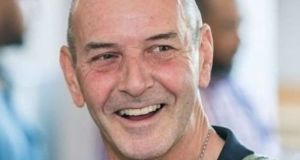 The Congolese man accused of murdering Dubliner John Curran in Cape Town last November has claimed the charity worker tried to rape him in his apartment.

He is also accused of aggravated robbery.

Prosecutor Johan Swart told the court postmortem results showed Mr Curran suffered 26 stab wounds to his chest, neck and head, as well as blunt force trauma to the right side of his skull.

He was also strangled with such force that both sides of the thyroid bones in his neck were broken.

The 25-year-old murder-accused told his bail application at Cape Town Magistrates Court on Tuesday that he had killed Mr Curran in self-defence.

The former school principal had finished working as the director of education at Irish NGO Mellon Educate in Cape Town shortly before he was killed.

Mr Onyoka said he was seeking bail as he did not believe he would survive long enough in Pollsmore Prison, one of South Africa’s toughest jails, to defend himself at trial, which is not expected to take place until next year.

Mr Swart told the court the state was opposing bail on the grounds Mr Onyoka was a flight risk, as he was illegally residing in the country and had tried to leave the country before he was arrested on November 25th.

Magistrate Vusi Mhlanga denied the accused bail in the interests of justice but said Mr Onyoka was allowed to recount his version of the events that led up to Mr Curran’s death as part of his application.

In an affidavit read out to the court by his lawyer Anthony Berinato, Mr Onyoka said he met Mr Curran at the Fantasy Lounge in Goodwood, where he worked as a cleaner.

The 60-year-old Irishman approached him at the bar with an offer to improve his life circumstances, Mr Onyoka’s said in the affidavit.

Mr Curran gave the Democratic Republic of Congo national his business card and asked him to call the next day.

“When I called he offered to help me get a job and with my immigration status. We met later in the day and chatted in his car. He asked me about my job as a cleaner and said he wanted me to have a better life,” Mr Onyoka said, before adding Mr Curran also gave him a a cell phone as a gift.

He went on to say Mr Curran then left South Africa for a short time but promised to get in touch when he got back, when he would set the 25-year-old accused up as a car salesman and sort out the necessary paperwork.

Upon his return to South Africa Mr Curran invited Mr Onyoka to his apartment, the accused said, where he proceeded to give him an alcoholic drink that made Mr Onyoka feel “woozy”.

“I waited for Mr Curran to assist me. He sat next to me on the sofa and he tried to kiss me. I pushed him away because I felt uncomfortable. I then went to the toilet because I was not feeling well,” Mr Onyoka recalled.

Mr Curran then allegedly followed the accused into the toilet, said he “wanted to see,” and peered over his shoulder to look at Mr Onyoka’s genitals while he was urinating.

“He shoved me against the wall saying you don’t understand what I need,” Mr Onyoka claimed, before going on to say he was “panicked and terrified”.

“I was trying to push him off me, but he had his hands on my genitals. I saw a knife on the table, grabbed it and began to stab him. He became very angry and began to choke me. I stabbed him again and he stopped choking me,” he said.

After the struggle ended, Mr Onyoka said he left the apartment without taking anything.

“I felt violated and terrified. I did not know he was dead; I did not know what I had done. I was acting in my own defence as it was clear Mr Curran intended to rape me,” Mr Onyoka’s statement concluded.

After denying Mr Onyoka bail the magistrate postponed the case to May 16th next to give police time to finish their investigations.