Firearms carried by PSNI in Republic for last six years 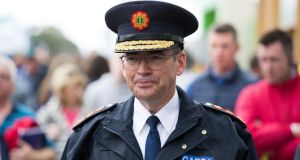 Garda Commissioner Drew Harris: his judgment has been questioned over his remaining in a PSNI vehicle after crossing the Border from the North. Photograph: Tom Honan

PSNI officers have been allowed carry firearms in the Republic since 2013, the Department of Justice has said.

The department was responding to queries about the practice of armed PSNI officers escorting Garda Commissioner Drew Harris across the Border and to Garda Headquarters in the Phoenix Park in Dublin.

“For sound reasons, there is a long-standing practice of not commenting on the specifics of security arrangements,” a justice spokesman told The Irish Times.

He went on to say the Minister for Justice had the power to grant firearm certificates to foreign personnel “where it is deemed necessary to do so” and that the Garda was consulted about any such decision.

“A reciprocal arrangement is in place since 2013 between An Garda Síochána and the PSNI relating to the carriage of firearms in relation to certain people travelling between the two jurisdictions.”

On March 25th an unmarked PSNI Range Rover carrying Mr Harris was damaged when a garda at the gate of Garda HQ failed to recognise it and activated security bollards which speared the bottom of the vehicle.

Mr Harris, who had been in Northern Ireland on official business, had been driven to the Border by armed PSNI officers where he was met by a Garda Emergency Response Unit (ERU) vehicle.

However, instead of transferring to the Garda vehicle as is usual, Mr Harris remained in the PSNI vehicle which drove in convoy with the ERU vehicle to Dublin.

The incident has raised questions about the extent of PSNI activity in the Republic. Dermot Ahern, who was minister for justice from 2009 to 2011, said he was never aware of PSNI officers being permitted to carry firearms during his tenure.

He also said that every time he travelled to Northern Ireland his Garda driver would have to leave his firearm in a local station before they crossed over the Border. After they crossed, the PSNI would “insist every time” that he transfer to their vehicle for the onward journey.

“It was very inconvenient at times because all your things would be in your car and you’d want to stay in the car to discuss things with your own people.”

Mr Ahern said his Garda driver would usually wait with a friend of Mr Ahern’s in Newry and “have a cup of tea” until the PSNI brought the minister back. PSNI officers would never escort him south past the Border, he said.

Reports of the PSNI’s role in protecting Mr Harris in the South have angered some rank-and-file members of the Garda who see it as a denigration of the function of the highly trained ERU which is responsible for the commissioner’s safety.

However, a senior source said it made “good operational sense” not to pause at the Border to transfer vehicles, especially at a time of increased activity from dissident republican groups.

In almost identical statements, the Garda and the PSNI said both organisations were “content normal procedure was followed”.

“It is not standard operating procedure, the usual way that we do things, that an armed escort from the PSNI would travel to Garda headquarters to protect the commissioner of the Garda Síochána,” he said.

“Drew Harris needs to indicate why he exercised this particular judgment in this case because it is, in my professional experience, most unusual,” he told RTÉ Radio.