Truck death migrants all believed to be Vietnamese

British police issue appeal to Hughes brothers to hand themselves in 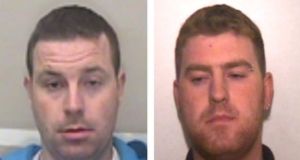 Ronan Hughes (40) and his brother Christopher (34), from Armagh, whom British police said were crucial to their inquiries. Photograph: HO/Essex Police/AFP via Getty

Police in Essex now believe all 39 migrants found dead in the back of a lorry in the UK last week were from Vietnam.

“We believe the victims are Vietnamese nationals, and we are in contact with the Vietnamese government,” said Assistant Ch Const Tim Smith.

“We are in direct contact with a number of families in Vietnam and the UK, and we believe we have identified families for some of the victims whose journey ended in tragedy on our shores.”

The victims’ identities cannot be made public until evidence is collected from a number of countries.

According to lead investigator Det Chief Insp Daniel Stoten, officers had spoken by telephone to Ronan Hughes recently but needed to question the brothers in person.

“I want to make a direct appeal,” he said in Belfast yesterday. “Ronan and Christopher, hand yourselves in.”

The Vietnamese embassy in London said it was “deeply saddened” by the findings of Essex police.

“The embassy of Vietnam in London will closely co-ordinate with the relevant authorities of Vietnam and UK to support the families ... to bring their loved ones home.”

Specially trained staff, supported by Vietnamese interpreters, are running a hotline between 9am and midnight, seven days a week, for anyone seeking to make contact.

Police in Vietnam arrested two people yesterday on suspicion of involvement in the deaths. Ha Tinh police also summoned others for questioning as part of an investigation into human trafficking.